Prime Minister Narendra Modi paid a stirring tribute to Netaji Subhas Chandra Bose from the Red Fort on Sunday, to mark the 75th anniversary of the proclamation of the Azad Hind Government, or provisional government of free India on October 21, 1943

Prime Minister Narendra Modi paid a stirring tribute to Netaji Subhas Chandra Bose from the Red Fort on Sunday, to mark the 75th anniversary of the proclamation of the Azad Hind Government, or provisional government of free India on October 21, 1943.

Having instituted a new award in the name of Netaji Bose marking the bravery of those in Khaki less, than an hour earlier at the dedication of the National Police Memorial on National Police Day, PM Modi proceeded to Red Fort where each year the Prime Minister of India delivers the Independence Day speech on August 15, and hoisted the Tricolour. Accompanying him were Netaji Bose's grandson Chandra Nath Bose and Lalti Ram Ji, one of the last surviving members of the Azad Hind Fauj that Bose had raised. 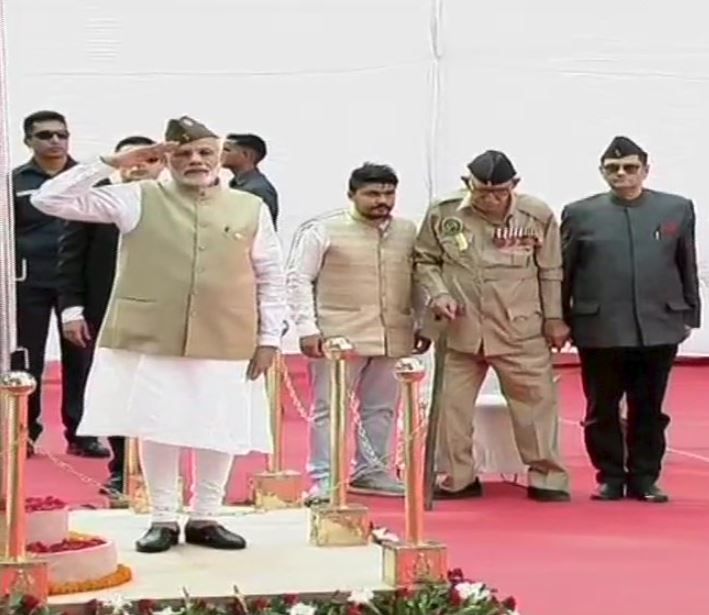 Beginning his speech, PM Modi saluted "the parents who gave India sons like Netaji", and spoke about how the Red Fort was the place where Netaji dreamt that a victory parade would be held when India got Independence. Freedom, PM Modi said, was Netaji's only mission. He spoke about how Azad Hind Sarkar was the first government of free India and added that it wasn't just 'Azad Hind Government' in name, but also that under Bose's leadership, every possible scheme was made available.

"First he was with Gandhiji in the Congress but later he chose his own way", Modi said, going on to remark that "Netaji had been a source of inspiration for those fighting for self-determination and freedom in other countries as well", naming Nelson Mandela as being among those who looked up to him.

However, coming to the present, the Prime Minister said that "Even so many years after Independence, Netaji's dreams haven't been fulfilled. We've achieved much but there's still a lot to be done." He put forth an account that India had a habit of viewing Europe through the lens of England, and said that it was unfortunate that even after Independence, India had been viewed through the same 'English lens'. India's education and many other aspects suffered as a result of this, PM Modi said, going on to contrast what could have been had there been margdarshan of people like Netaji and Sardar Patel rather those who looked at things with a foreign lens. He followed that with a political lament, alleging that a particular powerful family (an unmentioned reference to the Nehru-Gandhi family) had forgotten Netaji's contribution the same way as they had Sardar Vallabhbhai Patel's and Babasaheb Bhimrao Ambedkar's.

Speaking about the contributions and philosophies of Netaji Bose with regards to winning Independence, which he submitted was that India must be ready to make every sacrifice and shed blood to liberate itself, the Prime Minister spoke about the Army.

"He said that India must have a great army to protect us. India has such an Army. Josh, Junoon and Jazba, this has been the tradition of our Army. Now, it's being augmented by technique and equipment."

Having said during the course of his speech that "Some forces from outside and inside the country are targeting us" and that "every Indian needs to be inspired by Netaji to defeat them", PM Modi added a warning:

"We have never sought other's territory. But whoever poses a threat to India, they will get repaid doubly in kind."

He proceeded to detail his government's contributions to the Armed forces, listing the fulfillment of promises on One Rank-One Pension and how it had ensured that retired personnel were also well taken care of. Coming to gender balance in the forces, he also mentioned the steps taken towards inducting women fighter pilots in the Air Force, and also, the appointment of India's first woman Raksha Mantri Nirmala Sitharaman, before concluding his speech.