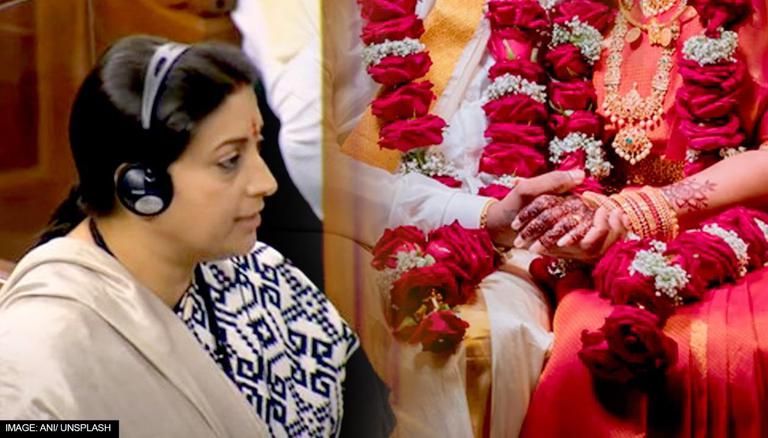 
Union Cabinet Minister for Women & Child Development, Smriti Irani on Tuesday tabled The Prohibition of Child Marriage (Amendment) Bill, 2021 in the Lok Sabha, calling it a 'historic step'. The bill aims to introduce parity in the legal marriage age of men and women.

While proposing the bill, Irani asserted that the act should be applicable across all religions, castes, and creeds. "We're, in a democracy, 75 years late in providing equal rights to men and women to enter into matrimony. Through this amendment, for the first time, men and women will be able to make a decision on marriage at the age of 21, keeping in mind the right to equality," said Union Minister Smriti Irani.

"This act should be applicable across all religions, all caste, all creed. I request that it should be sent to the standing committee. While introducing this act, this is a historic step," she added.

The Bill is to increase the age of marriage of women from 18 years to 21 years. pic.twitter.com/lHSOzBSswC

"It's against the right to freedom under Art 19. An 18-yr-old can choose a PM, can have a live-in relationship but you are denying the right to marriage. What have you done for an 18-yr-old? Women labor force participation in India lower than Somalia," Owaisi said.

READ | Owaisi takes on Centre over proposal to raise legal marriage age; 'Why is PM so afraid?'

"Except for Women's Reservation Bill, Govt doesn't believe in consulting anybody. It's very important that such an imp Bill has to be sent to Standing Committee or Select Committee & they've to review it & ask for opinions in civil society & then bring the Bill," said DMK MP Kanimozhi.

It's the 2nd or 3rd time consecutively, they're aggressively bringing Bills & nobody from Oppn is consulted. Whatever is discussed in Business Advisory Committee is never implemented on floor of House. I want to condemn this new practice which this govt is doing: Supriya Sule,NCP pic.twitter.com/T0wXEgPelx

The Union Cabinet on December 15 cleared a proposal that would increase the minimum marriage age for women from 18 to 21 years, the same as that of men. The proposal was framed on basis of recommendations made by a task force set up by the Ministry of Women and Child Development. Headed by Jaya Jaitley, the task force made extensive recommendations based on consultations from experts, young adults, young women, and others whom the decision affects directly. The development comes over a year after the plan was announced by Prime Minister Narendra Modi during his Independence Day address in 2020.