Amid the ongoing cruise drug bust case and the political blame game between the state government and the Centre, Ramdas Athawale has backed the NCB and the BJP. 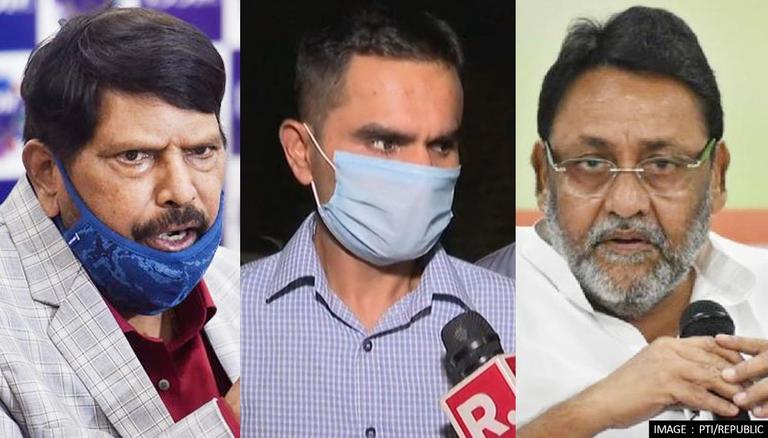 
Amid the ongoing cruise drug bust case in Mumbai and the political blame game between the Maharashtra government and the Centre, Union Minister Ramdas Athawale on Sunday has backed the Narcotics Control Bureau (NCB) and the Bharatiya Janata Party (BJP). Refuting NCP leader and Maharashtra minister Nawab Malik's allegations, Athawale asserted that the anti-drug agency is an independent entity. He also added that the NCB has no connections with the BJP.

"NCB is an independent body. It has no connections with BJP. When it comes to its activities and functioning, political parties are completely unrelated and irrelevant. Malik is deliberately making false allegations against the BJP. NCB is doing its work correctly." said Athawale during his interaction with ANI.

Earlier on Saturday, the Maharashtra minister alleged that a connection exists between the Zonal Director of Narcotics Control Bureau (NCB) Mumbai unit and the BJP leaders. Malik also claimed that there might have been talks between Sameer Wankhede and the BJP leaders. Malik also questioned that on whose directions did the NCB release those three people when a total of 11 people were detained after the cruise ship raid.

"We think there might have been some talks between Sameer Wankhede and BJP leaders," he said.

On October 3, the NCB busted a high-profile party on a cruise ship that was en route from Mumbai to Goa. The party allegedly involving celebrities, including actor Shah Rukh Khan's son Aryan Khan, was busted by the NCB after an eight-hour-long operation. Cocaine, hashish, MD, and other drugs were recovered, and eight people, including Aryan Khan, were detained. In follow-up raids after the big drug bust, the NCB recovered more drugs from the Cordelia cruise ship and detained several others who had arrived from Goa.

Over the course of the next few days, the NCB arrested eight more people - Shreyas Surendra Nair, Manish Rajgaria, Avin Sahu, Gopal Jee Anand, Samir Sehgal, Manav Singhal, and Bhaskar Arora and seized 2.5 grams of ecstasy, 54.3 grams of Mephedrone, a small quantity of Multi strain Cannabis and Marijuana from their possession. Later, a peddler from the Jogeshwari area and a Nigerian national were nabbed. Meanwhile, Aryan Khan, whose bail was denied on Friday, is serving his 14-day judicial custody in Mumbai's Arthur Road jail.