BJP's two-day meeting with party MPs was convened on Wednesday. The purpose of the party was to have direct discussions with the MPs ahead of UP Assembly polls 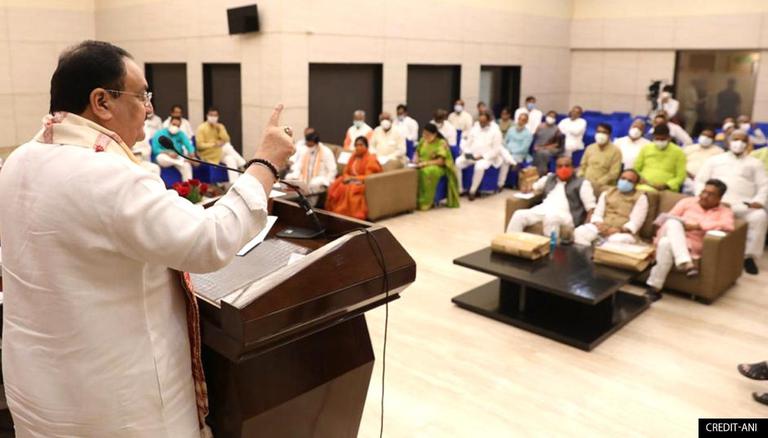 
Ahead of the upcoming Assembly elections, BJP President JP Nadda on the first day of the two-day meet with the party MPs from Uttar Pradesh spoke on various issues including their role in the poll-bound state. Discussions were held directly with the MPs preparing them for the upcoming elections and the COVID vaccination drives amid the pandemic situation.

During the first day of the two-day meeting at Delhi Constitution Club, BJP asked the UP MPs to complete the COVID-19 vaccination drives on time to make provisions to control the third wave of the pandemic, reported ANI.

According to Subrat Pathak, General Secretary of BJP, Uttar Pradesh, who is also MP from Unnao spoke on the handling of the COVID-19 situation. "In today's meeting, discussions were held about the upcoming programs of our organization and what will be the role of all our MPs in them. There was also a discussion regarding vaccination. We were asked to ensure vaccination was completed and all the people in our constituency received a second dose. Also, in every village, we were asked to appoint one-one trained woman, a man health volunteer so that if there is a possibility of a third wave, then they can help in treatment. He has to be equipped with a complete kit to deal with COVID", said Pathak.

Furthermore, the meeting also highlighted the work done by BJP in the past 12 months in the interest of the public. BJP has urged the MPs to work together with the ground workers to take the aid of State and Central governments to every citizen.

Discussions on the strategies to be adopted for the upcoming elections in UP also took place in the meeting chaired by the party President Nadda along with Chief Minister Yogi Adityanath, State Party Chief Swatantra Dev Singh among other senior leaders.

BJP's meet on UP Elections

BJP's two-day meeting with party MPs from Uttar Pradesh was convened on Wednesday. The purpose of the party was to have discussions with the MPs regarding the preparation of the upcoming elections in UP as well as discussions on the COVID-19 situation.