Unruffled by BSP's attempt to stage a comeback in Uttar Pradesh, Ramdas Athawale claimed that it won't win more than 5-10 seats in the upcoming Assembly polls. 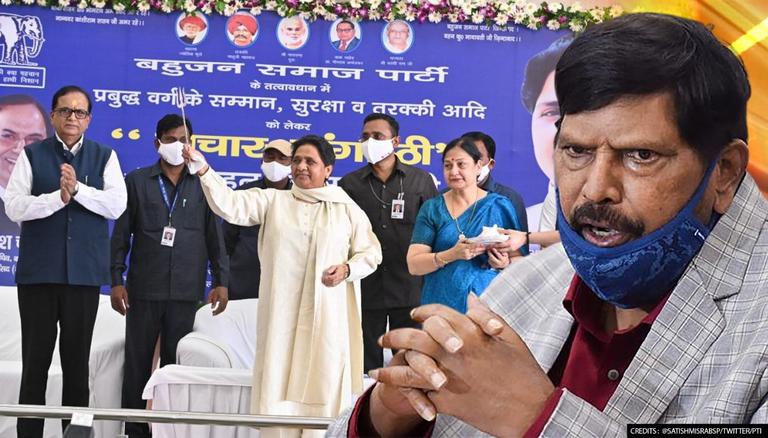 
Unruffled by BSP's attempt to stage a comeback in Uttar Pradesh, Union Minister Ramdas Athawale claimed that the Mayawati-led party won't win more than 5-10 seats in the upcoming Assembly polls. Addressing the media on Tuesday, the RPI(A) president opined that Mayawati shall find it impossible to repeat BSP's 2007 election performance. This comes on a day when she addressed her first big public rally since 2020 to kick off her party's poll campaign.

BSP's Brahmin outreach ahead of UP polls

In the 2017 Uttar Pradesh Assembly election, BJP won a whopping 312 seats in the 403-member House, whereas BSP could win only 19 seats. On the other hand, the SP-Congress alliance failed to bear fruit as it could win in only 54 constituencies. The Mayawati-led party is eyeing a comeback in the state in the upcoming Assembly election after being out of power for 9 years now.

The BSP supremo has maintained that Brahmins are very unhappy with the Yogi Adityanath-led government despite overwhelmingly voting for BJP in the previous Assembly election. On July 23, BSP General Secretary Satish Chandra Mishra offered prayers at the Ram Janmabhoomi in Ayodhya and commenced the party's first phase of the campaign to woo Brahmin voters.  Stressing that the real power will come only when Brahmins and Dalits in UP come together, he said, "Brahmin community constitute 13 per cent of the state population but are still marginalised because Brahmins are not united".

Notably, Mayawati's social engineering had propelled BSP to power in 2007 with the party winning 206 out of 403 seats in the state Assembly. For instance, she allocated nearly 139 seats to the upper caste candidates out of 86 were Brahmins. It is believed that SC Mishra played a key role in bringing Brahmins close to the party as he organized a series of rallies projecting BSP's poll symbol 'elephant' as Lord Ganesh.