Breaking her silence after her posters were removed from the Rajasthan BJP headquarters, Vasundhara Raje stated that this doesn't affect her political stature. 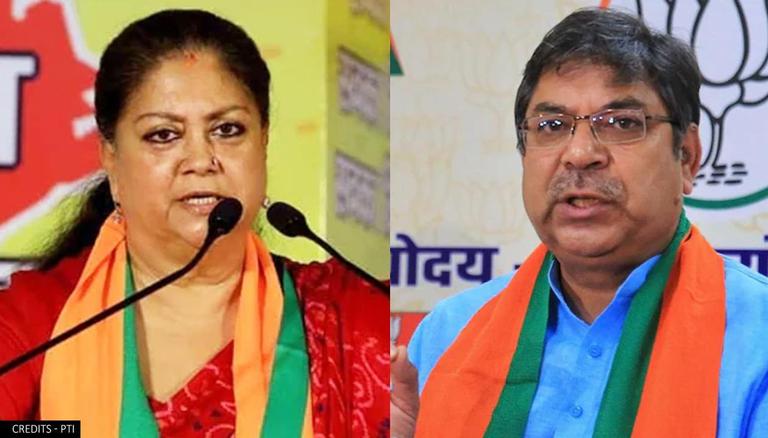 
Breaking her silence after her posters were removed from the Rajasthan BJP headquarters, ex-CM Vasundhara Raje affirmed that this doesn't affect her political stature. Speaking to the media on Wednesday after concluding her three-day visit to the flood-affected areas in Jhalawar, Raje stated that it was necessary to take everyone along in political life. She recalled having disapproved of the large-sized posters of her put up in the state after her victory in the 2013 Rajasthan Assembly election. Moreover, the BJP national vice-president stressed that the love and blessings of people are most important for her.

Former Rajasthan CM Vasundhara Raje remarked, "When I entered politics, Rajmata Sahiba told me that all 5 fingers are not the same. When you talk to people in the villages, you have to take everyone long akin to a family. Politics is not everything."

"If you recall, when I became the Chief Minister for the second time, I saw that many big posters of me were put up everywhere. I had told them that you have not increased my worth by putting up these posters. Nothing will happen if my face is in the posters. I want to rule in the hearts of people. My work should be remembered. When people remember it, they will love me," she added.

I want to rule in hearts of the people, rather than in posters. My work should be remembered. I'll not achieve anything through posters. Nothing is more important than receiving love & blessings of people: Former Rajasthan CM Vasundhara Raje on BJP poster row in the state (11.08) pic.twitter.com/5ELwS9v8i3

The speculation about the rift between Vasundhara Raje and BJP state chief Satish Poonia has gained traction with her reduced participation in political activities after the saffron party's defeat in the 2018 Assembly polls. For instance, she remained conspicuous by her silence during the crisis in Congress' Rajasthan unit whereby Sachin Pilot and multiple MLAs posed a serious threat to the stability of the Ashok Gehlot-led government. In fact, erstwhile BJP ally Rashtriya Loktantrik Party accused Raje of trying to save the Congress government in Rajasthan.

According to RLP president Hanuman Beniwal, she and Gehlot had a "nexus" whereby they covered up each other's alleged corruption. Furthermore, he claimed to have proof of Raje calling up Congress MLAs close to her and asking them to support the Rajasthan government. Incidentally, Pilot too accused the Chief Minister of helping his predecessor in multiple ways such as allowing her to retain a government bungalow. Amid growing speculation that the BJP vice-president is not the preferred CM face of the top brass for the 2023 polls, several persons claiming to be her supporters have floated the 'Vasundhara Raje Samarthak Manch Rajasthan'.

The outfit's letterhead which has the photo of Raje and BJP co-founder Vijaya Raje Scindia closely resembles the letterhead of BJP. Its office bearers have demanded that she should be declared the CM candidate for the next Assembly election as well. So far, the senior BJP leader has not publicly distanced herself from this initiative. Her independent initiatives during the COVID-19 pandemic such as a helpline and 'Vasundhara Jan Rasoi'- providing free food to the poor have been perceived as an attempt to reassert her authority. Around two months ago, a war of words erupted between her supporters and BJP workers after the new party posters did not have her photo.