Members of Parliament of both houses will vote on Saturday to elect the next Vice President of India in an election where NDA candidate Jagdeep Dhankhar is pitted against Opposition pick Margaret Alva. 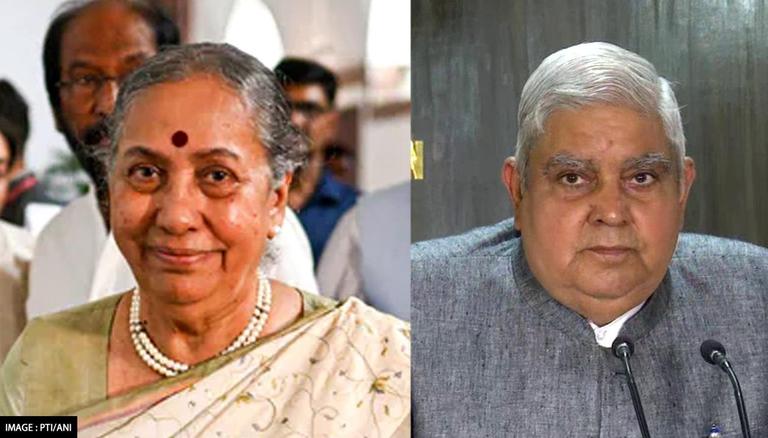 Members of Parliament of both houses will vote on Saturday to elect the next Vice President of India in an election where NDA candidate Jagdeep Dhankhar is pitted against Opposition pick Margaret Alva.

With numbers stacked in favour of the NDA, former West Bengal governor Dhankhar is set for an easy win.

Cracks were visible in opposition unity as Mamata Banerjee's Trinamool Congress decided to abstain from voting alleging lack of consultations while deciding on the name of Alva.

The 80-year-old Alva is a Congress veteran and has served as governor of Rajasthan and Uttarakhand, while the 71-year-old Dhankhar is a Jat leader from Rajasthan with socialist background.

Alva, however, received the backing of regional party Telangana Rashtra Samithi(TRS) on Friday, two days after Aam Aadmi Party and Jharkhand Mukti Morcha (JMM) lent their support to the opposition candidate. The AIMIM has also extended its support to Alva.

With the support of some regional parties like the Janta Dal (United), YSRCP, BSP, AIADMK and Shiv Sena, the NDA nominee is likely to get over 515 votes, enough for a comfortable win for him.

Alva is likely to get over 200 votes, going by the support announced by parties for her candidature so far.

The Trinamool Congress, which has 23 MPs in Lok Sabha and 16 in Rajya Sabha, has decided to stay away from the vice presidential election.

"If Parliament is to function effectively, MPs, independent of their parties, must find ways to rebuild trust and restore broken communication amongst each other. In the end, it is the MPs who determine the character of our Parliament," Alva said in a fresh video message ahead of elections.

She said she has seen debates and differences and yet an atmosphere of give and take, which is now lacking. "The time has come for all parties to get together and to restore the faith and the trust in each other and restore the dignity of Parliament," Alva said in her fresh appeal to MPs.

Leader of Opposition in Rajya Sabha Mallikarjun Kharge also hosted a dinner on Thursday night to thank all opposition MPs who are supporting Alva.

Dhankhar, on the other hand met a number of BJP MPs at his residence on Friday. These include Sushil Kumar Modi, Gautam Gambhir, Rajyavardhan Rathore, Rajendra Agrawal, Pradeep Choudhary and Kartikeya Sharma, among others. He has been meeting party MPs while seeking their support for the poll.

While polling will be held from 10 am to 5 pm on Saturday, the ballots will be counted immediately after that. By late Saturday evening, the returning officer will announce the name of the next vice president.

Members of Lok Sabha and Rajya Sabha, including nominated members, are eligible to vote in the vice presidential poll.

The term of incumbent M Venkaiah Naidu ends on August 10. The vice president is also the chairperson of Rajya Sabha.

The election is held in accordance with the system of proportional representation by means of a single transferable vote and the voting at such election is by secret ballot.

There is no concept of open voting in this election and showing the ballot to anyone under any circumstances in the case of presidential and vice-presidential elections is totally prohibited, the EC has cautioned, adding that parties cannot issue whip to its MPs in the matter of voting.