In the latest development in Tamil Nadu, 'Captain' Vijaykanth's DMDK has decided to pull out of the AIADMK-led NDA alliance ahead of Assembly elections

In the latest development in poll-bound Tamil Nadu, 'Captain' Vijaykanth's DMDK has decided to pull out of the AIADMK-led NDA alliance ahead of Assembly elections in the state. DMDK's move to split with NDA comes after multiple rounds of seat-sharing talks between DMDK and AIADMK remained inconclusive. Earlier, DMDK had demanded AIADMK to allot the same number of seats given to PMK and had threatened to exit the alliance if the demand wasn't met. DMDK announced that it was severing its alliance with AIADMK as the ruling party did not allot seats or constituencies asked by Vijaykanth's party despite three rounds of talks.

'Captain' Vijaykanth of the DMDK went on to become the leader of Opposition in Tamil Nadu after winning 29 of the 41 seats the party contested in 2011, thereby weakening the power of the DMK. However, in the subsequent Assembly elections in 2016, Vijaykanth's DMDK was floored completely after contesting in alliance with CPI(M), CPI, MDMK, and VCK. After exiting AIADMK-led NDA, it will be interesting to see if DMDK approaches the third-front comprising of Kamal Haasan's MNM, Owaisi's AIMIM, Sarath Kumar's AISMK, and Paarivendhar's IJK. 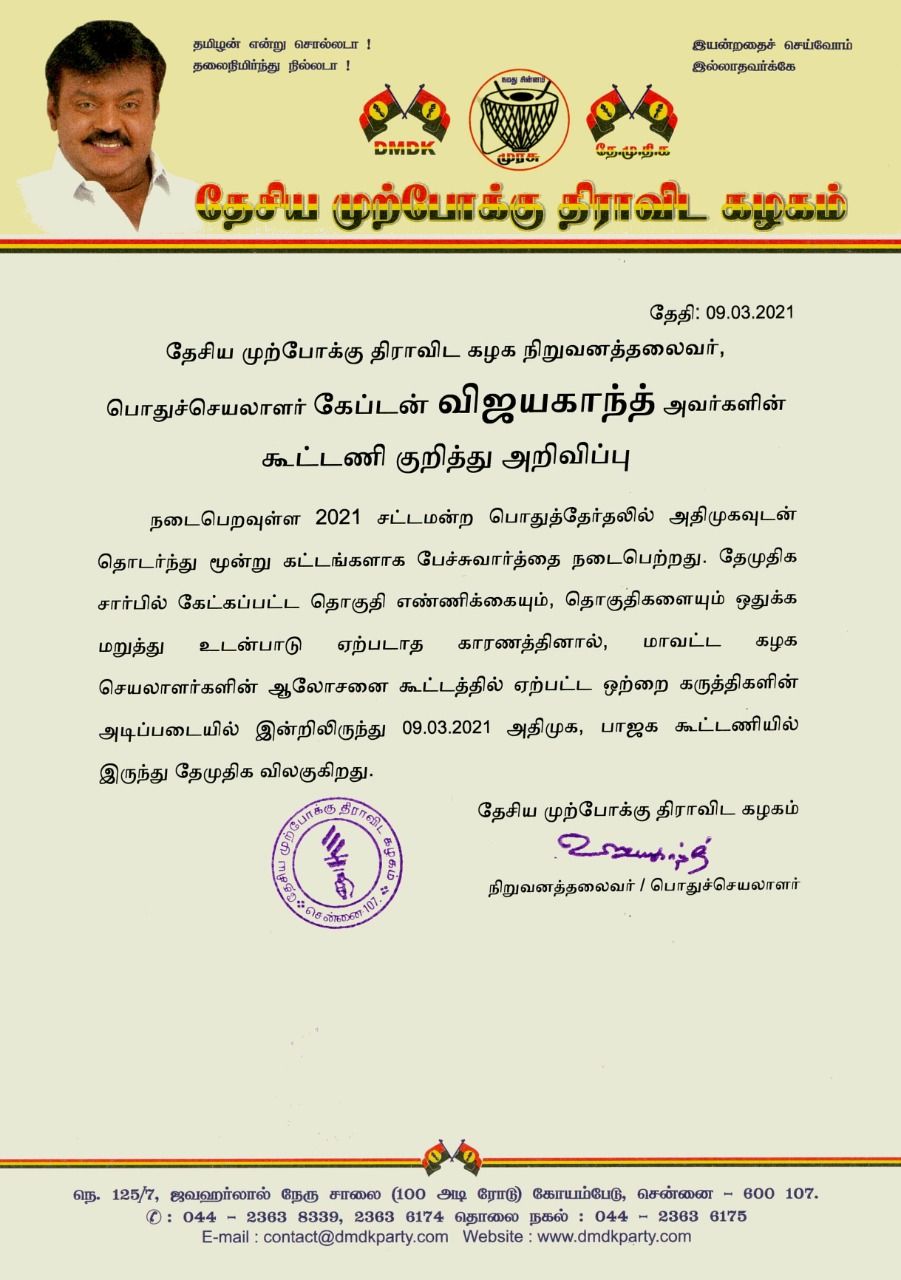 Meanwhile, the All India Anna Dravida Munnetra Kazhagam (AIADMK) decided to allot 20 seats to its NDA ally BJP in the upcoming Tamil Nadu Assembly polls, Dy CM O Panneerselvam said on Saturday. The announcement comes after multiple rounds of talks between the two parties, with the saffron party demanding more seats while the ruling AIADMK was hesitant resulting in an impasse. Dy CM OPS revealed that BJP had been allotted 20 seats in the AIADMK-led alliance and wished the ally luck for the upcoming polls. AIADMK also finalized its alliance with PMK, allowing the latter to field candidates from 23 constituencies under the alliance. Assembly elections are scheduled to be held in Tamil Nadu in a single-phase, with polling on April 6 followed by the announcement of results on May 2.

With AIADMK announcing its state alliance with BJP, the EPS-OPS-led party had refuted any possibility of reconciling with Sasikala, who has now retired from politics ahead of the elections. The EPS-OPS-led AIADMK, on the other hand, is wary of Dhinakaran potentially ending in a position where he could be a kingmaker in case of a hung assembly as AMMK stitched an alliance with Owaisi's AIMIM, marking the latter's entry into Tamil Nadu electoral politics. Meanwhile, in a bid to woo voters, EPS has announced a massive farm loan waiver, free COVID vaccines, Pongal gift and rescinded cases against Jallikattu protestors, anti-CAA protestors, COVID lockdown violators, and Kudankulam nuclear power plant protestors.