VP Venkaiah Naidu deleted & reposted Tamil poet Thiruvalluvar’s pictures, and apologised for the error that saw a controversy around a saffron-clad Thiruvallur

In his latest tweet, VP Naidu said that the picture of Thiruvalluvar in the saffron robe was posted by one of his staffers by mistake.

The earlier tweet was posted by mistake by a staff of Vice President Secretariat and was deleted soon after it was noticed.

After VP Naidu posted the picture of the legendary poet in affron robes on Thursday at 6:17 am, DMK MP Senthil Kumar took an objection to it and asked the VP to use the TN govt approved picture of Thiruvalluvar. He also asked the VP to remove the saffronized picture seemingly depicting the poet in religion and caste. Subsequently, VP Naidu deleted his old tweets and reposted the tweets in with Thiruvalluvar’s picture in white robes at 10:20 am. 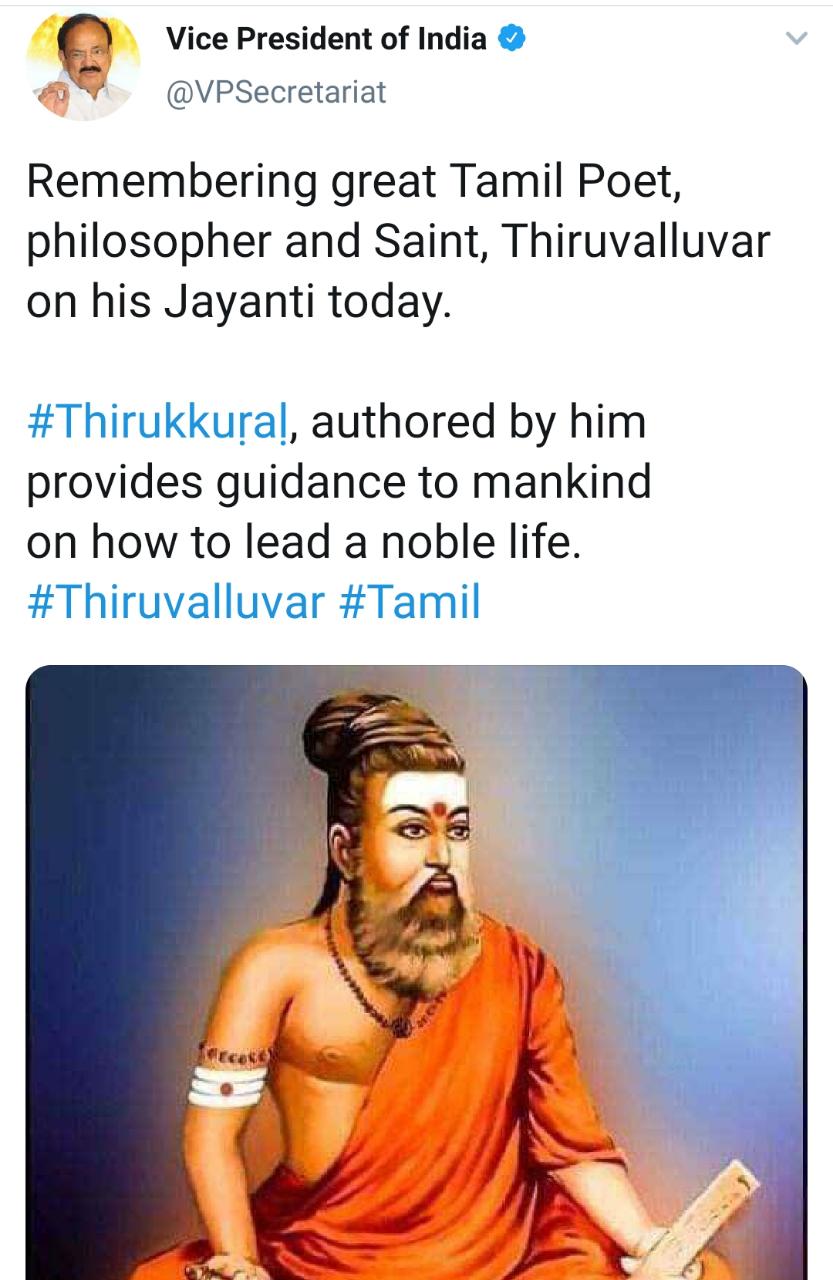 Remembering great Tamil Poet, philosopher and Saint, Thiruvalluvar on his Jayanti today.#Thirukkuṛaḷ, authored by him provides guidance to mankind on how to lead a noble life. #Thiruvalluvar #Tamil pic.twitter.com/YETwVVcUlr

The Thiruvalluvar controversy started when the Bharatiya Janata Party's Tamil Nadu unit's Twitter handle posted a picture of poet Thiruvallur in saffron attire, vibuthi (sacred ash) smeared on his forehead and rudraksha mala, triggering outrage in certain quarters. The ideological debate initially kick-started on social media, between the left and right-wingers. The incident took place on the same day when Prime Minister Narendra Modi released a Thai translation of Thirukkural at a community event in Bangkok.

Just after this controversy broke out, a statue of Thiruvalluvar at Thanjavur district's Pillayarpatti village was smeared with cow dung by miscreants. BJP supporters claimed that Thiruvalluvar is Hindu and even his work Thirukkural has reference to many Hindu gods and so there's nothing wrong in giving the poet a saffron attire. Atheist commentators opposed this narrative and started sharing images of Thiruvallur with black clothes supposedly symbolizes atheism.

The back and forth kept trending on social media for days. Thiruvalluvar Day is celebrated in January in his honour after Pongal. But the legendary poet's origins and ideologies have been debated for centuries. This debate has often brought in a political tussle.

Dravida Munnetra Kazhagam Chief MK Stalin said, "BJP trying to give saffron tone to Thiruvalluvar is a betrayal to Tamil language and BJP's attempt to show Valluvar in the saffron attire is trying to pull into their saffron clan."