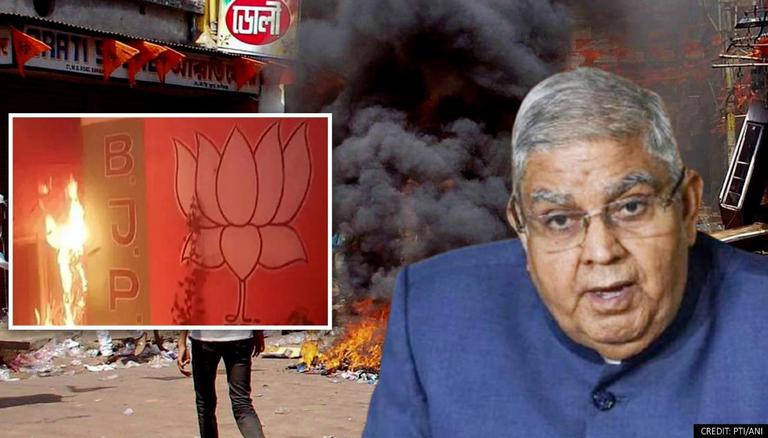 
West Bengal Governor Jagdeep Dhankhar on Monday blasted the West Bengal Director General of Police (DGP), Kolkata Police Commissioner, and the State Home Secretay for not sending him a detailed report on the post-poll violence cases in the state. The Governor questioned the lack of accountability and sought a report soon. He also announced that he will be visiting the areas affected by the violence.

Dhankhar said, "It is a menace. What plan they have in the coming days to control this menace? No report came forward. DGP and Kolkata Police Commissioner had sent a report on May 3, to the Home Chief Secretary. It has not been made available to me to date. I want to know why? There is no explanation whatsoever as to why the report which was meant for me has still not been given to me. Why the CS Home failed to do the lawful duty of giving me an update on the steps taken."

He added, "If this is the state of affairs with respect to the constitutional head, in times of such crisis, you can imagine, what kind of lack of accountability we are witnessing in the state. I again tell them to do the needful without loss of time. A request has been made towards the state government that the Governor would like to visit the affected areas and a helicopter be made available."

There has been massive post-poll violence which has reportedly claimed 16 lives so far in the state. While the Home Ministry sought a full report from the state government regarding the post-election violence targeting opposition political workers and sent a 4-member team, Prime Minister Narendra Modi had called up WB Guv Dhankhar and expressed his anguish at the law and order situation. CM Mamata Banerjee requested everyone to remain peaceful. Addressing a press conference last Tuesday, BJP national spokesperson Sambit Patra opined that such scenes have never been witnessed in the country's electoral history. On Thursday, Banerjee had announced a compensation of Rs.2 lakh each to the kin of the deceased persons and informed that out of the 16 people who lost their lives.