West Bengal Chief Minister Mamata Banerjee on Thursday paid a visit to Raj Bhawan in Kolkata. She was seen greeting Governor Jagdeep Dhankhar and his wife. 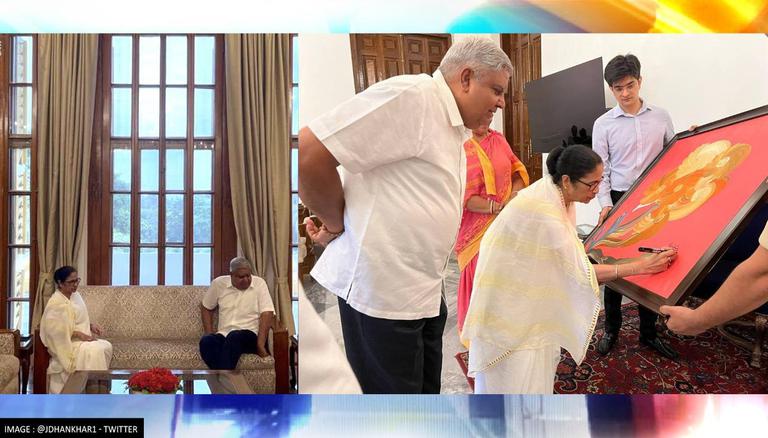 
As the political rivalry between West Bengal Chief Minister Mamata Banerjee and Governor Jagdeep Dhankhar continues, the WB CM on Thursday paid a visit to Raj Bhawan in Kolkata. In the visuals shared by Dhankhar on Twitter, Mamata was accompanied by the city's Mayor Firhad Hakim and a few other officials to the Governor's official residence.

The West Bengal CM was seen greeting Dhankhar and his wife, following which, she was seen signing a massive painting of flowers. This was her second recent visit to Raj Bhawan since June 7.

This comes three days after the West Bengal cabinet passed the resolution, allowing Chief Minister Mamata Banerjee to replace Governor Jagdeep Dhankhar as the Chancellor of state-run universities. The cabinet had on May 26 approved a proposal to replace the Governor as the chancellor of varsities amid his political tussle with the TMC-led government. Until now, the Governor was holding the Chancellor's position in the 17-government aided universities.

A huge controversy erupted over the decision when WB Education Minister Bratyabrata Basu on May 26 made a massive announcement, stating that it has been decided to replace West Bengal Governor Jagdeep Dhankhar with Chief Minister Mamata Banerjee as the Chancellor of all state universities.

Dhankhar is the ex-officio chancellor of the state-run universities, including Calcutta University, Jadavpur University and Presidency University.

"VCs of 24 Universities appointed by Mamata Banerjee in disregard of law. These are ex facie in defiance of specific orders or without approval by Chancellor-the Appointing Authority," the governor had tweeted.

READ | 'I am ready to give my blood but won't allow division of West Bengal': Mamata Banerjee

"These appointments carry no legal sanction and would be forced to take action unless soon recalled," he had added. The warning had come close on the heels of chancellors and vice-chancellors of private universities not attending a meeting called by the Governor earlier in the same month at the Raj Bhavan.

The state Education Minister had last year said that it was time to introspect whether there was a "need to continue with the colonial legacy" of getting the governor to hold the post of chancellor. The West Bengal cabinet's decision was based on a recommendation made by the Punchhi Commission in 2010 that the convention of appointing Governors as chancellors of universities be stopped.