In a dig at RSS chief Mohan Bhagwat's pitch for unity, Congress Rajya Sabha MP Digvijaya Singh opined that he should preach this message to his disciples. 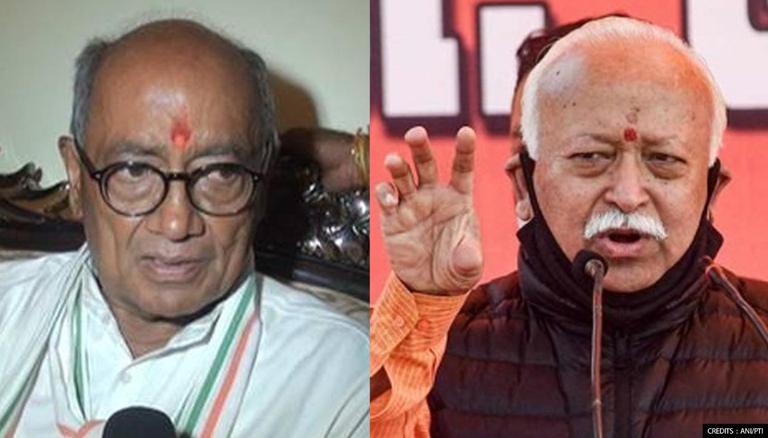 
In a dig at RSS chief Mohan Bhagwat's pitch for unity, Congress Rajya Sabha MP Digvijaya Singh opined that he should preach this message to his disciples. Stressing that he will become Bhagwat's "fan" if this happens, Singh however contended that this was a very difficult task. For instance, he highlighted that it will be tough to address the level of hatred between Hindus and Muslims allegedly fostered by RSS and its affiliates.

Former Union Minister Digvijaya Singh remarked, "Will Mohan Bhagwat give his message of 'All Indians have the same DNA' to his disciples, pracharaks, VHP and Bajrang Dal activists? Will you preach this lesson to Modi, Shah and other BJP Chief Ministers? I will become your fan if you ask your disciples to compulsorily follow this message. But this is not easy. You have created such hatred between Hindus and Muslims that it will be difficult to reduce it."

"If you are honest in your intentions, please direct the removal of all BJP leaders who have harassed innocent Muslims from their posts. Start with Narendra Modi and Yogi Adityanath. I know that you will not do it because there is a difference in what you preach and practice. You rightly said that we are Indians first. But must explain it to your disciples. They have advised me to go to Pakistan on multiple occasions," the Congress leader escalated his attack on the BJP leader.

Speaking at the launch of the book 'The Meeting of Minds: A Bridging Initiative' on Sunday, Bhagwat spoke about the virtue of being Indians first. He said, "This is a democracy. Now, nobody can talk of Hindu domination or Muslim domination. Everyone should talk about Indian domination". On this occasion, the RSS supremo also propagated that the DNA of all Indians is the same as they have the same ancestors. In a veiled jibe at Muslim intellectuals, he dismissed the notion that Hindus will overpower the minorities.

RSS chief Mohan Bhagwat opined, "We all are one so there is no need to fight. The DNA of all Indians is the same for the last 40,000 years. We all come from the same ancestors and it is scientifically proven and that it what unites us, and not politics. Some 'intellectuals from minority' are under fear that Hindus will overpower them. Those who have come here have survived - this is a proven fact".