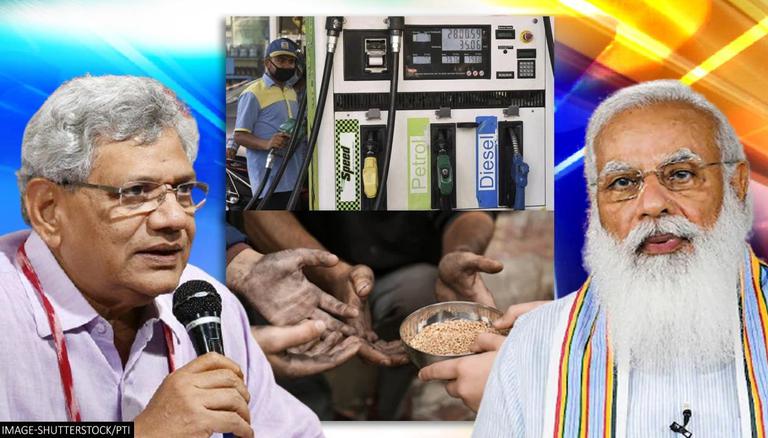 "I congratulate the countrymen on this accomplishment. However, I believe that only 21 per cent of the population is administered with the second dose of the COVID-19 vaccine. In today's address to the nation, the Prime Minister did not speak on issues like rising fuel prices, unemployment, and hunger in the country," Yechury said.

India on Thursday achieved the feat of completing 100 crores COVID vaccination jabs within the timespan of nine months. The CPIM leader had on Thursday appealed to the government to pull out the Central excise duty for fuel in respective states.

Comparing the efficiency of India's vaccination campaign to that of China's, Sitaram Yechury said, "Vaccine century is an achievement in itself but one must know that there are only two countries in the world that have a population of more than 123 crores. The other country has administered more shots of the second dose as compared to ours. Previously, the Prime Minister had given the assurance that by the end of the year, all the adults in the country will be vaccinated by this assurance seems far-fetched."

Citing people's problems and hitting out at the Centre for failing to emphasise on the said issues, the CPIM leader said, "People have so many problems. The Prime Minister did not mention any problem. The price of petrol and diesel are increasing every day, farmers' agitation is going on since a year, the Lakhimpur Kheri incident happened, unemployment is increasing, hunger is increasing, more than 10 million tonnes of food grains are lying in Central godown. While is the government not distributing it? All these important issues which are related to the everyday life of people."

India on Thursday achieved a historic feat as it has administered more than 100 crores COVID-19 vaccination jabs since the country's inoculation drive began. Earlier the day, PM Modi addressed the nation and congratulated the citizens of India on this achievement in the battle against the pandemic.

A total of 100 crore vaccine doses have been administered so far to eligible beneficiaries, as per the CoWIN portal. India's COVID-19 vaccination drive was launched on January 16, 2021. From February 2, front-line workers were made eligible for vaccination. The vaccination drive was expanded from March 1 to include persons above 60 years of age and those above 45 years with associated specified 20 comorbidities. It was further expanded to all people above 45 years of age from April 1. From May 1 all persons above 18 years of age were made eligible for COVID-19 vaccination.