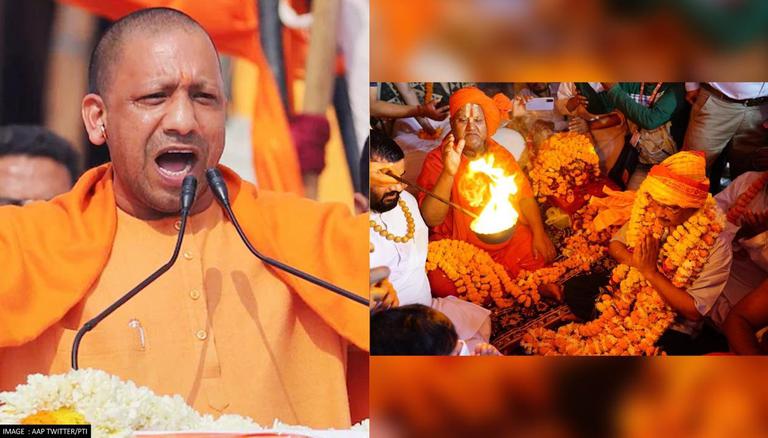 
Scoffing at Delhi CM Arvind Kejriwal's Ayodhya visit, UP CM Yogi Adityanath on Tuesday, claimed that he was using Ram's name to reap electoral gains. Reminding Kejriwal of the UP migrants chased out of Delhi during lockdown, Adityanath asked 'How will you handle UP?'. Slamming Opposition sudden affinity towards Lord Ram, he criticised them for not doing anything for Ram Mandir.

"There is one person from Delhi (Kejriwal) who had chased out UP people from Delhi itself when lockdown was imposed. Now he is saying I will give this and that free. You can't even handle UP people in Delhi, now you want handle entire UP?," asked Adityanath.

He added, "Before, they used to abuse Lord Ram. Now, when they feel that without Ram they will not be able to win, they are coming to Ayodhya to take darshan of Ram Lalla. It is good that they are understanding the importance of Lord Ram now. There is no Opposition leader who didn't criticise late Babuji (Kalyan Singh) on December 6, 1992. They never did anything for Ram, but now are using his name to win elections".

Defending his Ayodhya visit, Kejriwal tweeted, "Delhi means free medicines for all, better education, protection of daughters, respect for elderly. Today, I announced that the people of Delhi will be given free pilgrimage to Ayodhya from tomorrow. Then, it will be implemented in UP also. With this scheme, crores of people will be able to see the Lord. Yogiji, why do you object to this?"

Earlier in the day, Delhi CM Arvind Kejriwal paid respects to Lord Ram at the Ram Lalla shrine in Ayodhya, visited Hanmangarhi and performed an 'aarti' on the bank of river Sarayu. Stating that everyone should get the opportunity to visit Ayodhya, he reiterated his govt's policy allowing free trips for elders to Ram Mandir once completed. AAP, which is eyeing to make inroads into Uttar Pradesh, has vowed to provide 'world-class education, health facilities, farmers' rights and jobs to youth. Like in Gujarat, Uttarakhand, Punjab and Goa, AAP has also offered free electricity upto 300 units for all.

In March, Kejriwal announced that his government will arrange for free darshan for Delhi's senior citizens after the 'Grand Ram Temple' is constructed in Ayodhya. Addressing the Budget session, Kejriwal termed himself a 'Hanuman Bhakt' and explained the concept of 'Ram Rajya' founded on 10 principles. Including most of his own government's schemes, Kejriwal listed hunger-free, good education, good health facilities, free electricity, free drinking water, jobs, shelters for the homeless, women safety, respect for the elderly, and equality as the 'principles of Ram Rajya' - on which he claims to have based his government.