Taking a swipe at the Delhi CM, Lekhi said, "Your name is Kejriwal, not Natwarlal, so please stop keeping the people in the dark by writing letters to Centre 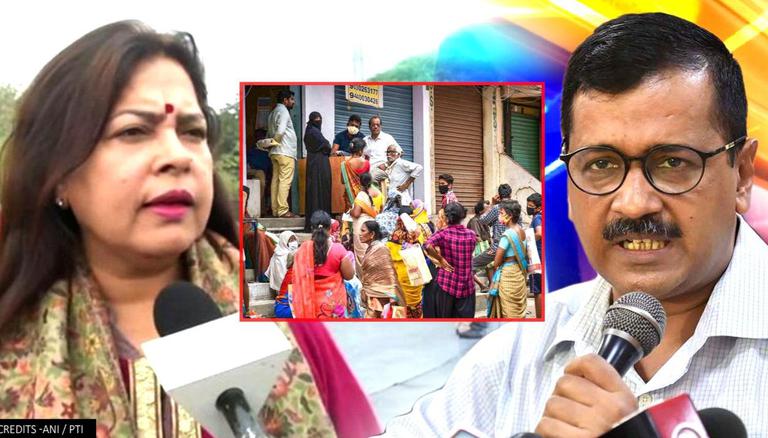 
Amid the ongoing tussle between the Centre and Delhi government over the discontinuation of the doorstep ration delivery scheme, BJP MP Meenakshi Lekhi on Tuesday said the decision was taken to bring transparency in the ration distribution process.

Taking a swipe at the Delhi CM, Lekhi said, "Your name is Kejriwal and not Natwarlal, so please stop keeping the people in the dark by continuously writing letters to the Centre."

Natwarlal was a legendary conman.

"You have been the Chief Minister of Delhi for more than five years. Tell me how many licenses of ration shops you have cancelled, how many people have been sent to jail, how many FIRs have been lodged and what actions you have taken in these years besides writing letters to the Prime Minister. If not done, then it is clear that your MLAs and you yourself are part of the mafia," the BJP MP said attacking Kejriwal.

Lekhi said the BJP would welcome the chief minister’s move if he formulates its own ration scheme for the people of Delhi.

"As far as the question of doorstep delivery of the ration goes, tell us from where you bought this ration and also about the allocation in the Budget for the same. Which all households you identified as the beneficiaries. We welcome if you want to make a rationing scheme on your own but first make arrangements for that because the ration that you have is given to Delhi under the Food Security Act," she added.

Several leaders of the BJP had slammed Kejriwal calling the doorstep delivery of ration by the Delhi government a "scam". On Sunday, BJP spokesperson Sambit Patra alleged there is zero Aadhaar card authentication in the capital, against the national average of 80%. He also claimed that the Kejriwal government had earlier stopped the operation of POS machines that allow biometric verification.

The Delhi CM on Tuesday wrote to PM Modi, urging him to implement the 'doorstep ration delivery scheme' in the city. In the two-page letter to PM Modi, Arvind Kejriwal stated that the AAP-led government had always supported the Centre when it came to matters of 'national interest' and in turn, wanted PM Modi's support for this scheme. He also offered to amend it as per the Central government's wishes.