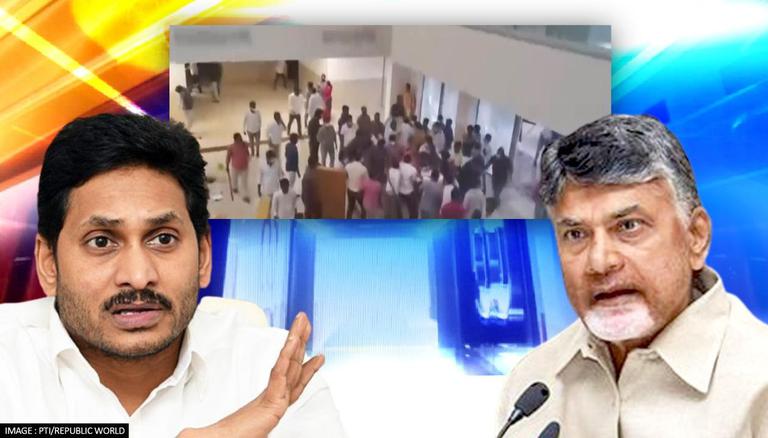 
Hours after Telugu Desam Party's (TDP) central office in Mangalagiri was vandalised on Tuesday, the YSRCP denied any role in the incident. TDP chief Chandrababu Naidu had alleged that his party office was vandalised by 'goons' of the ruling YSRCP in protest against the TDP spokesperson's remarks against Chief Minister YS Jagan Mohan Reddy.

"The YSRC party has nothing to do with the attacks on TDP offices. The party condemns the outrightly abusive statements made by the TDP spokesperson against the CM. Such statements were never made against any leader in the history of our great nation. This is a new low.  The party categorically denies any links to the attacks," the party said in a statement.

The YSRCP further said that such abusive statements against a loved CM and leader "could've provoked his fans" but added that the party has nothing to do with what unfolded. TDP president Chandrababu Naidu claimed that YSRCP gangs came armed with sticks and rods, beating up the TDP activists at its Mangalagiri office. The furniture and the windowpanes were damaged, he claimed.  Condemning the attack as 'state-sponsored terrorism'' and 'organised crime,', the former CM called for a state-wide bandh on Wednesday.

"I am asking isn't this state-sponsored terrorism? This is clear cut terrorism. Law and order have failed in the state. I have seen many such Rowdy, I am not afraid of such Rowdy. Not afraid of the mafia. it's an organised crime. There should be a proper inquiry into the matter," said Naidu.

The controversy erupted when TDP leader Pattabhiram, in objection to police notices sent at former minister Nakka Ananda Babu, made some remarks against the Andhra Pradesh CM. The Office of Andhra Pradesh DGP had said that strict action will be taken against attackers and those making provocative speeches.

"Additional forces have been deployed across the state. We request citizens to co-operate in maintaining peace and to not get provoked," the statement said.

Meanwhile, Chandrababu Naidu has complained to Union Home Minister Amit Shah and state Governor Biswabhusan Harichandan over the attack. He requested the Home Ministry to deploy central forces at PDP offices, while alleging that TDP workers were physically injured during the attack.