Finance Minister Nirmala Sitharaman on Friday presented the Union Budget 2019-20 which had major announcements across various sectors. And to comment on the same, business tycoon Anand Mahindra took to his Twitter to share his analysis in 6 tweets.

To begin with, the Government has suggested modifications to the Electric Vehicles (EVs) Goods Services Tax (GST) Council. In a bid to make the cars affordable, the government has proposed lowering the GST rate on EVs from the present 12% to 5%. Furthermore, customers will receive an extra tax deduction of 1.5 lakh on the interest paid on the loans made for purchase of electric vehicles.

Anand Mahindra began by saying that he was hoping that Nirmala Sitharaman would 'hit some boundaries' but she chose to take 'steady singles to keep the run rate moving'. Later, Mahindra went on to write that the budget was an 'accumulation of seemingly unspectacular moves'.

The Chairman of Mahindra Group later commented on how the 'measures for the financial sector' are indeed 'big moves' and could also help 'lubricate the engines of the economy'. He also mentioned that the introduction of inheritance tax couldn't been more unnerving and concluded by saying that 'increased income taxes spooked the markets' and finally, 'the elephant analogy was most apt.

Tweeted earlier that I was hoping @nsitharaman ji would ‘hit some boundaries.’ She chose instead to take steady singles & keep the run-rate moving. Despite expectations of big moves to instantly crank-up the economy she decided to keep her eye firmly on the long term; (1/6)

Instead of lowering GST on all cars,she aligned with the vision for mobility&incentivised only https://t.co/Ca5IhmdsSR fact, the budget is an accumulation of seemingly unspectacular moves that’ll NUDGE the economy onto a trajectory toward $5T & an improved ‘ease of living.’(2/6)

But the measures for the financial sector are indeed big moves & could lubricate the engines of the economy. The one-time cover for pooled assets is an efficient solution for NBFC liquidity. The target for disinvestment is welcome. Now we need swift implementation...(3/6) 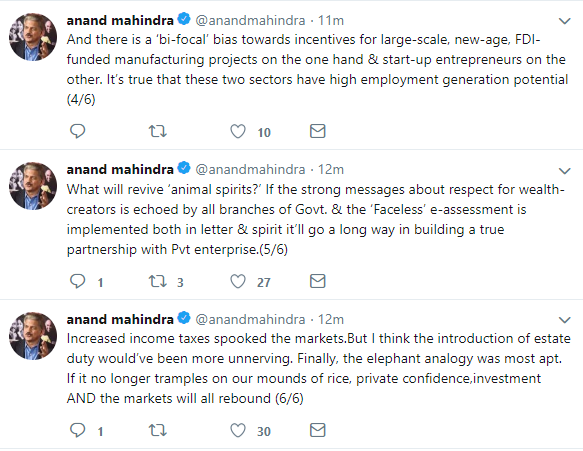 For those unaware, "I, therefore, propose to enhance surcharge on individuals having taxable income from Rs 2 crore to Rs 5 crore and Rs 5 crore and above so that effective tax rates for these two categories will increase by around 3 % and 7 % (percentage points) respectively,” Finance Minister Nirmala Sitharaman told the Lok Sabha in her 129-minute speech.

Hours ahead of the presentation of the Union Budget 2019 by Finance Minister Nirmala Sitharaman on Friday, business tycoon Anand Mahindra took to Twitter and extended best wishes to her on the big day.

In his tweet, the Chairman of Mahindra Group also regarded Nirmala Sitharaman as an inspiration for all the 'Nanhi Kali' girls in the country. Anand Mahindra further added that he hopes the Finance Minister to hit boundaries in the Parliament 'stadium' in the morning.