In her maiden Union Budget speech at the Parliament, India’s first full-time woman Finance Minister Nirmala Sitharaman spoke about the women of India saying that the country's tradition has been ‘Naari Tu Narayani’.

In her maiden Union Budget speech at the Parliament on Friday, India’s first full-time woman Finance Minister Nirmala Sitharaman spoke about the women of India, saying that the country's tradition has been ‘Naari Tu Narayani’.

Focusing on women empowerment, with the aim of boosting entrepreneurship among the women, Nirmala Sitharaman shared a quote from the letter of Swami Vivekananda to Swami Ramakrishananda which highlighted the importance of women for the world.

"Swami Vivekananda, in a letter to Swami Ramakrishananda, had said, 'there is no chance for the welfare of a world unless the condition of women is improved. It is not possible for a bird to fly on one wing'," the Finance Minister said.

Speaking about the government's aim to encourage and facilitate the role of women, Sitharaman proposed to form a broad committee in collaboration between government and private stakeholders in order to evaluate and suggest actions for moving forward.

"This government believes that we can make progress with greater women's participation. In India's growth story, particularly in the rural economy, in the Gramin Arth Vyavashta, the role of women is a very sweet story. This government wishes to encourage and facilitate the role of women. Gender analysis of the Budget aimed at examining the budgetary allocation through a gender lens has been in place for over a decade. I propose to form a broad-based committee by government and private stakeholders to evaluate and suggest actions for moving forward. There is no segment of human life where the contribution of women is not significant," she said.

#Budget2019 | The government believes that we can make progress with greater women participation. There is no segment of human life where the contribution of women is not significant: Finance Minister Nirmala Sitharaman pic.twitter.com/wKpkXYo69k

Adding that the government believes that India's women's role and leadership is distinct, Nirmala Sitharaman highlighted how the women's voter turnout in the 2019 Lok Sabha elections was the highest as compared to the previous elections. Not only this, the Finance Minister also brought to knowledge, the splendid number of women MPs in the Lower House of Parliament, which gained huge a cheer from the floor, as was seen.

"This government firmly believes that the socio-economic transformation that is taking place, particularly in the last decade, India's women's role and leadership is distinct. The recent elections have shown record-turnout of women voters at par with men. We also have a record number of 78 women MPs here in this house," she added.

In a massive move, Nirmala Sitharaman proposed to encourage women's entrepreneurship by expanding schemes such as MUDRA, Standup-India, Self Helf Groups among others.

"This reinforces our approach of going beyond just women-centric policy making to building women-led initiatives and movements. This government has supported and encouraged women's entrepreneurship through various schemes such as MUDRA, Standup-India, Self Helf Groups and so on. In order to further encourage women enterprises, I propose to expand the women SHG to all districts in India. for every women SHG member having a Jan Dhan bank account an overdraft of 5,000 should be allowed. One woman in every SHG will also be made eligible to loan up to 1 lakh under the MUDRA scheme," Sitharaman concluded. 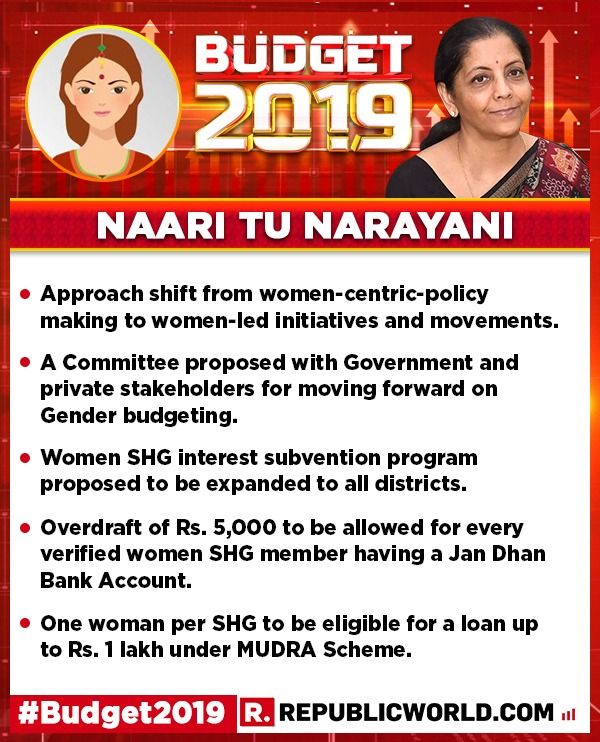