Kylie Jenner recently attended Schiaparelli's Paris Fashion Week show and 'roared' with her look as she donned a lifelike lion's head on her shoulders. 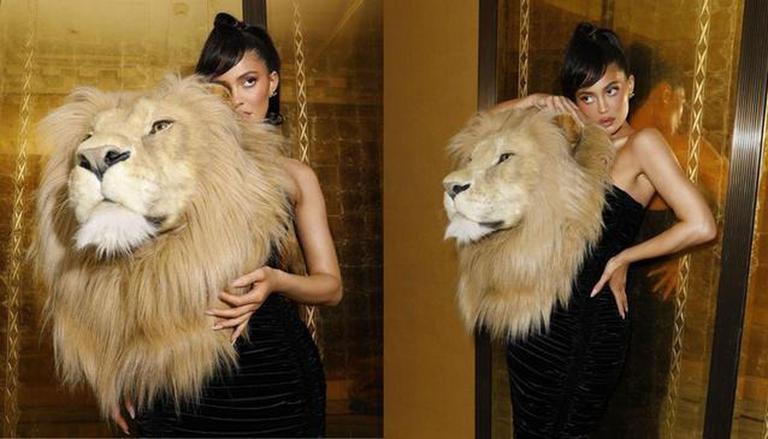 
Kylie Jenner was recently slammed by the netizens for encouraging poaching after she sported a fake lion's head on her shoulders at the Paris Fashion Week. Now, her designer Schiaparelli has clarified that 'No animals were harmed' while making Jenner's outfit.

Soon after Kylie's look went viral on social media, her designer, Schiaparelli clarified that Jenner's gown was made of “foam, wool and silk faux fur" in a social media post. The designer further informed that the fake lion was "hand painted to look as life-like as possible”.

Sharing Kylie's video, the designer wrote, "Leo Couture Embroidered Lion in hand sculpted foam, wool and silk faux fur, and hand painted to look as life-like as possible, celebrating the glory of the natural world. Nothing is as it appears to be in Schiaparellis Inferno Couture…NO ANIMALS WERE HARMED IN MAKING THIS LOOK."

According to CNN, "The collection was inspired by Dante's "Inferno" and the nine circles of hell — a metaphor for the doubt and creative torment all artists experience, wrote creative director Daniel Roseberry. Drawing literally from the three beasts that appear in the 14th century poem, Roseberry reimagined the leopard, the lion and the she-wolf in the collection; "representing lust, pride and avarice respectively."

Kylie Jenner was slammed by netizens

Kylie Jenner 'roared' with her look as she donned a lifelike lion's head on her shoulders. Jenner appeared on the runway in an all-black bodycon dress with tie-up detail at the back but all of that was overshadowed by the lion-faced adornment that was attached to her ensemble.

She accessorised her look with a side-parted hairdo, golden earrings, and minimal neutral-toned makeup. However, Kylie's look didn't go down well with many on social media.

Kylie's outfit sparked controversy among the netizens who slammed her ensemble by calling it 'bizarre' and 'the most stupid thing on the planet'.

A social media user wrote, "We have to stop showing animals as luxury ‘products’. They may be made from foam but these are endangered species that have historically been killed for their pelts to be turned into garments.”

Another wrote, "We won't be surprised if Kylie wears a real lion's head." A user penned, "So sad even if those are totally fake the message behind it will cause a lot of uncontrollable hunting."