Adline Castelino, represented India at the Miss Universe 2020 pageant in a Saree by designer Shravan Kummar. The competition was held in Miami, Florida. 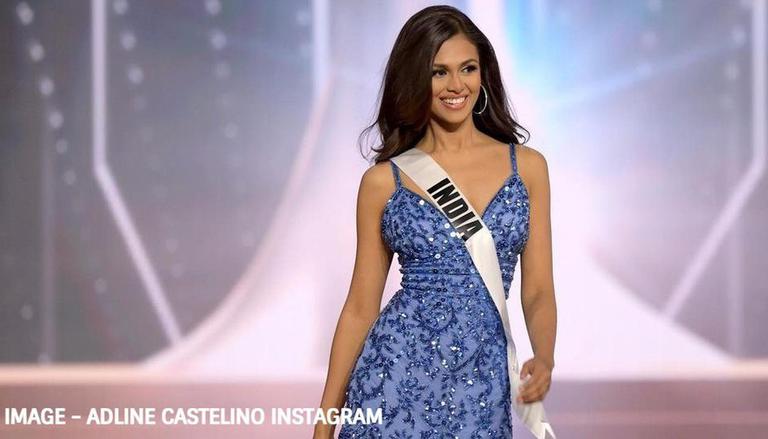 
Miss Diva 2020 winner, Adline Castelino, recently represented India at the Miss Universe 2020 competition. For the "National Costume" round of the competition, Adline wore an elegant 6 yards Saree which was inspired by the national flower of India, the Lotus. The costume was designed by Hyderabad-based designer, Shravan Kumar.

The border and drape of the saree were encrusted with embroidery depicting a three-hundred-year-old Pichwai artwork. While speaking about his design, Shravan Kumar wrote about how he adores sarees and believes they are "magical" as they cover India's culture "beautifully," in his Insta post. He also spoke about how it took him and his artisans more than 5 months to create the attire.

Shravan then went on to explain how the colour of the national flower and the "aura of women" inspired him to make the design, also mentioning how the "motives" on the saree depicted a "peacock eye", which is also the national bird of India. The designer then spoke about how the elegant outfit was a tribute to the "Nakshabandhas, the supreme Master of Art and their age-old hand weaving skills".

The designer then expressed praises for Adline Castelino and talked about how she carried the outfit "so well". He mentioned how he was extremely proud that the Miss Diva winner managed to carry off the outfit on a universal stage. He also spoke about how she empowered the "true essence of an Indian woman".

The 69th Miss Universe competition streamed live on Voot Select at 5:30 am, and will be available anytime after exclusively on the OTT platform. The competition was held in Miami, Florida. Contestants from 74 countries and territories competed in the competition which was hosted by Mario Lopez and Olivia Culpo. The winner of Miss Diva 2020, Castelino represented India at the competition.

READ | DYK Gal Gadot and Tanushree Dutta competed against each other at Miss Universe pageant?

The competition consisted of several rounds from the evening gown round to the bikini round followed by the national costume round. Andrea Meza of Mexico was crowned the Miss Universe 2020 winner and was crowned by her predecessor Zozibini Tunzi of South Africa. Even though Castelino was not crowned the Miss Universe 2020 winner, the Diva was the 3rd Runner-Up in the competition.