Ayudha Puja: Know The History, Meaning And Significance Of This Navratri Day

Ayudha Puja is the celebration of the killing of the demon Mahishasura by Goddess Durga. On this day, devotees clean and worship the instruments they use. 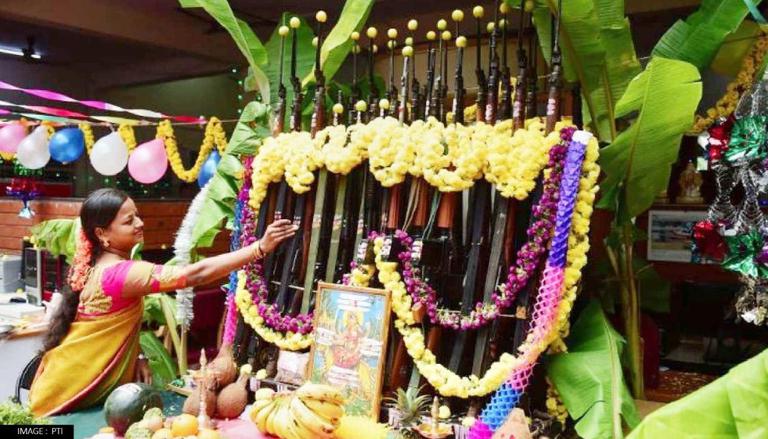 
Day nine of the Navratri festival celebrates Ayudha Puja, which is a symbolic victory of good over evil. Ayudha Puja or Astra Puja translates to ‘worship of instruments’ and devotees celebrate the day by worshipping and cleaning their instruments and tools. Celebrated on October 14, Ayudha Puja is celebrated along with Saraswati Puja in the southern states of the country.

"Ayudha Puja simply means to worship the instruments, weapons, machines or tools one uses. Moreover, the day finds relevance as it is the celebration of the killing of the demon Mahishasura by Goddess Durga," as per Wikipedia.

According to Hindu mythology, Mahishasura began killing innocent people after receiving a boon from Lord Brahma that made him almost immortal. The demon could only be killed by a woman and this made him massacre people in his way without fear.  Wanting to stop the massacre of the innocent, all gods approached Brahma for help. He then tasked Goddess Durga with the killing. All gods, who wanted the demon dead at all costs handed their weapons to the goddess. The day is celebrated as the victory of good over evil and the custom of worshipping instruments and weapons rise from the goddess’ use of weapons in the battle to win.

Participating in the celebrations, Prime Minister Narendra Modi, on Thursday, extended best wishes to the citizens of the country on the occasion of Mahanavami, which marks the last day of the Navaratri festival. In his tweet, he wished for the blessings of Goddess Siddhidatri on the citizens of India. "Maa Siddhidatri is worshipped on the auspicious occasion of Mahanavami in Navratri. I wish that with his blessings everyone should attain their accomplishment. This praise of her for the devotees of Mata...," PM Modi wrote in his tweet in Hindi.

READ | No public celebrations in Delhi during Holi, Navaratri, Shab-e-Barat due to rising COVID cases

The Goddess Durga and her nine forms are worshipped during the Sharad (autumn) Navratri festival. The holiday is observed in various ways throughout the country.  Devotees offer prayers to Goddess Durga and fast for nine days. The festival, also known as Sharad Navratri, is supposed to commemorate Goddess Durga's victory over the monster Mahishasura, symbolising the victory of good over evil. Dussehra or Vijaya Dashami is observed on the tenth day of Sharad Navratri. The Navratri festival will take place from October 7 to October 15. Ashtami is on October 13 this year, and Dashami is on October 15.

Shardiya Navratri is a nine-day festival that begins on the first day of Shukla Paksha in the Ashwin month, during which the divine forms of Maa Durga are worshipped. This year's Navratri, on the other hand, will last only eight days, beginning today and finishing on October 14. Around the country, the festival is celebrated in a variety of ways. From Himachal Pradesh to West Bengal, Punjab to Karnataka, India celebrates unity in variety, which is reflected in the way Navratri is observed and the goddess Durga is worshipped.