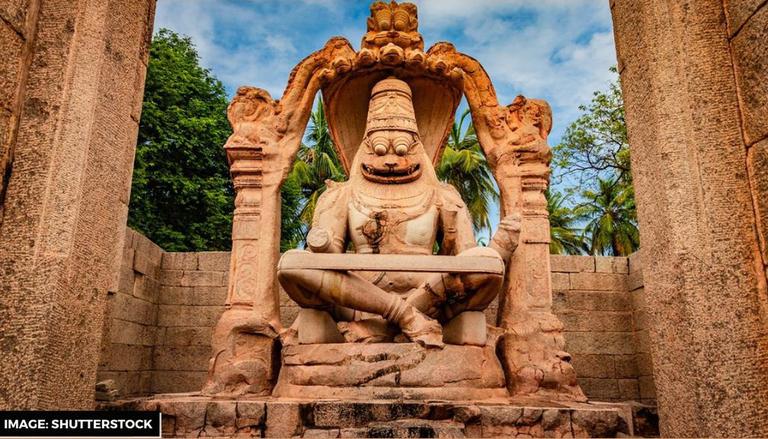 
Narasimha Jayanti is celebrated on the Vaishakha Shukla Chaturdashi, during which Lord Vishnu appeared as his 4th incarnation Lord Narasimha. Lord Narasimha is a half-man and half-lion and is famous for killing the demon king Hiranyakashyap and in turn saving his ardent devotee Prahlada. This occasion is mainly celebrated to solemnize the victory of good over evil. Every year, Narasimha Jayanti falls between the months of April and May. According to the Hindu calendar, the fourteenth day of Shukla Paksha is meant to be the day when Narasimha appeared out of the pillar to mark the historic event of the death of Hiranyakashyap.

According to legends, a man named Kashyap and his wife Diti had given birth to two children named Hiranyakashipu and Harinyaksha. Harinyaksha death came early as Lord Vishnu had to put him on death row to protect mankind and Earth. Deeply disturbed by the death of his brother, Hiranyakashipu took it upon himself to seek vengeance.on Lord Vishnu. As a result, he solely prayed to Lord Brahma for a long time and received a special benediction in return that would give him the power to not be killed by any human being, demigod, animal or other entities.

Soon after, Hiranyakashipu and his wife Kayadhu gave birth to Prahalad, who turned out to be an ardent devotee of Lord Narayana. Hiranyakashipu played many tricks in an attempt to divert his mind from praying to Lord Narayana and convert him into a demon instead. However, Hiranyakashipu failed each time, which prompted him into taking the final step of burning Prahalad. To perform this, the Asur king called upon his sister Holika, who had been bestowed a special blessing that would make her immune to fire. She sat amidst the flames and took Prahalad on her lap to commence the rituals. But under mysterious circumstances, it was Holika who got burnt by the fire and Prahalad was saved.

Before Hiranyakashipu could attack his own son, Lord Narasimha emerged out of a nearby pillar. Since Hiranyakashipu was powered by the boon to not be killed by any Deva, human being or animal during day or night, Lord Vishnu took the form of a half-lion and a half-man and appeared at twilight to destroy the Asur King. He put the demon on his thighs and disembowelled the demon using his sharp fingernails to slice up his chest. It is popularly believed that people who fast on this day are blessed by Lord Narasimha himself.

READ | MP allows 'restricted relaxations' in corona curfew in 5 districts
READ | Narasimha Jayanti Images to send to your friends and family on this auspicious day
First Published: 24th May, 2021 13:47 IST
SUBSCRIBE TO US