Researchers at NYU Grossman School of Medicine revealed that people who died of COVID-19 had on average 10 times amount of virus or viral load in lungs. 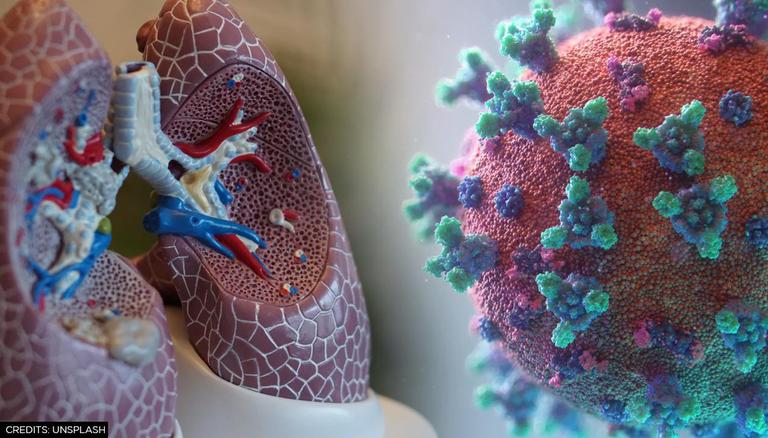 
A high buildup of the coronavirus in the lungs is likely behind the steep mortality rates witnessed during the pandemic, a new study conducted by the NYU Grossman School of Medicine, US and published in the journal Nature Microbiology, has found. Published on August 31, the study outlined the new findings the contradicted previous suspicions that simultaneous infections played a major role in a heightened risk of death in the coronavirus infection. Medics have also suspected that the symptoms flared during the COVID-19 infection may have contributed to the mounting death toll.  The study on Tuesday said that a simultaneous infection, such as bacterial pneumonia or an overreaction of the body’s immune defense system played a major role in a heightened risk of death during the pandemic.

Researchers at NYU Grossman School of Medicine revealed in the study that people who died of COVID-19 had on average 10 times the amount of virus, or viral load, in their lower airways as did severely ill patients who survived their illness. The study suggests that the investigators found no evidence implicating a secondary bacterial infection as the cause of the deaths, although they cautioned that this may be due to the frequent course of antibiotics given to critically ill patients.

“Our findings suggest that the body’s failure to cope with the large numbers of virus infecting the lungs is largely responsible for COVID-19 deaths in the pandemic,” study lead author Imran Sulaiman, MD, PhD, an adjunct professor in the Department of Medicine at NYU Langone Health said.

Scientists noted that the US Centers for Disease Control and Prevention (CDC) guidelines did not encourage the use of antivirals such as remdesivir for severely ill patients on mechanical ventilation. But according to Dr. Sulaiman, the NYU Langone study results suggest that these medications may still remain a valuable tool in treating these patients. Contradictory to the speculations that the virus prompted the immune system to attack the body’s own lung tissue that leads to dangerous levels of inflammation, the study claimed, that no such evidence was found as this being a major contributor to COVID-19 deaths. The strength of the immune response appeared proportionate to the amount of virus in the lungs, said Dr. Sulaiman. And the new study clarifies the role of secondary infections, viral load, and immune cell populations in COVID-19 mortality.

For the analysis, researchers collected bacterial and fungal samples from the lungs of 589 men and women who were hospitalized in NYU Langone facilities in Manhattan and on Long Island. All the patients had needed mechanical ventilation, including 142 patients who also received a bronchoscopy procedure to clear their air passages. Investigators analyzed the amount of virus within their lower airways and identified the microbes present by studying small pieces of the germs’ genetic code. They also surveyed the type of immune cells and compounds located in the lower airways. “Those who died had on average 50 percent lower production of a type of immune chemical that targets the coronavirus compared with the patients with COVID-19 who survived the illness,” the findings revealed.

READ | COVID-19: Bombay HC raises concern over crowding in public places, says it should be controlled

“These results suggest that a problem with the adaptive immune system is preventing it from effectively combating the coronavirus,” study senior author Leopoldo N. Segal, MD said. “If we can identify the source of this issue, we may be able to find an effective treatment that works by bolstering the body’s own defenses,” he added.