Amidst the coronavirus outbreak, Walt Disney World has announced to close down throughout the month of March effective from these dates. Read on to know more.

As the outbreak of Coronavirus has reached the pandemic stage and the whole world is taking precautionary measures to prevent against the disease, the famous Walt Disney World has also announced that it will shut down through the month of March. The official website of the Walt Disney World has issued a notice whereby it announced that it will shut down from March  16, 2020. Read on to know more.

Walt Disney World attracts a lot of tourists from around the world and hosts guests throughout the year. People visiting the park are not comprised of kids but adults and elderly people as well. The Walt Disney World has amusement parks, water parks and resorts, restaurants, etc which are always crowded owing to its popularity and the entertainment value it has. Hence, keeping the public health in mind and giving it a priority, the decision to close the park was taken and announced. Below are the details about the operational dates of its various categories 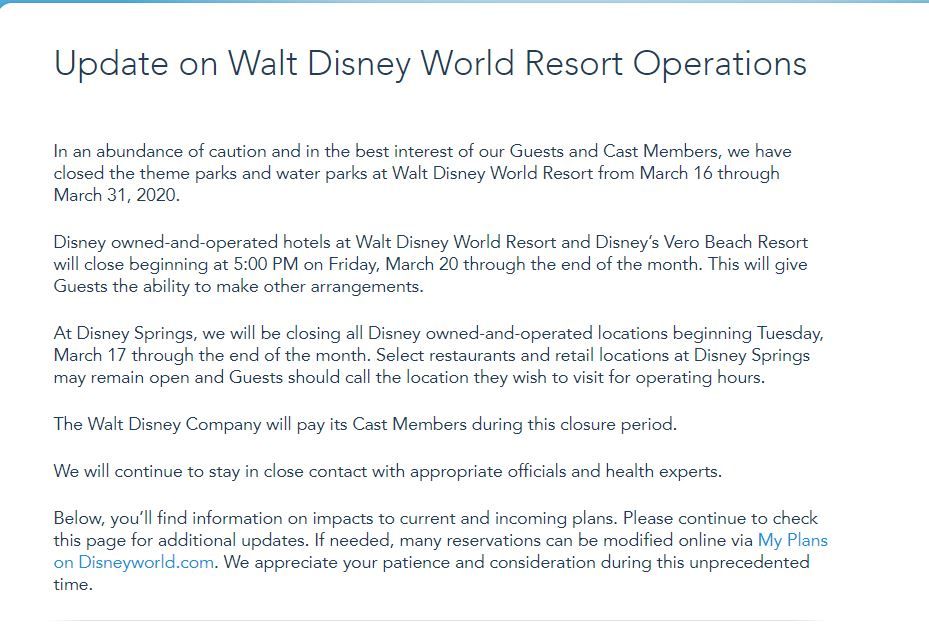 Read | California: Disneyland To Donate Excess Food Due To Closure Of Theme Park

The official website of Disney World has announced that theme parks and water parks at Walt Disney World Resort will remain closed.

As announced on Disneyworld.disney.go.com, Disney owned and operated hotels at Walt Disney World Resort and Disney’s Vero Beach Resort will close starting from 5:00 PM on March 20th, 2020 till the end of the month.

As announced on the website of Disney World, the Disney Springs will be close down from March 17th, 2020 till the end of the month. Only select restaurants and retail locations at Disney Springs might remain open and it is advised to guests to first call and confirm the locations they wish to visit and ask for their operating hours.

PEOPLE HAVE PLEDGED SO FAR
When in Goa, here is how to get the quintessential experience
Plougastel-Daoulas' 230-year-old mysterious rock's inscription finally deciphered
Bollywood's love for Jaipur is real and THESE movies are proof
Bollywood's love for New York City is represented in THESE movies; check list
Things to do in Delhi: Holi parties & Women's Day celebrations one can attend this weekend
DO NOT MISS
WADHAWANS' PICTURES ACCESSED
SANJAY NIRUPAM ON WADHAWAN JAUNT
'16,002 TESTS CONDUCTED IN 1 DAY'
RS 4,100 CR RELEASED TO STATES
YUVRAJ ON IND-PAK CONTEST
INDIGO TAKES A DIG AT VISTARA