Project Cheetah To Do Wonders For Rajasthan Tourism, Hope Experts

'Project Cheetah' is likely to give a fillip to tourism in Rajasthan in the long run, thanks to the state's proximity to Kuno-Palpur National Park, the entry point of which is just 100 kilometers away from Sawai Madhopur. 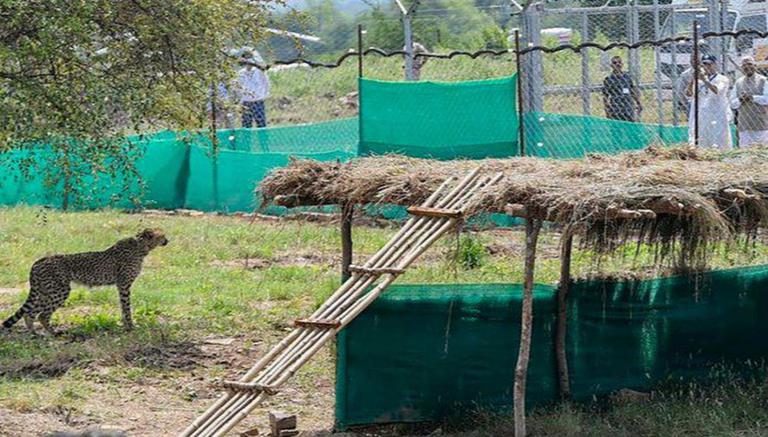 
'Project Cheetah' is likely to give a fillip to tourism in Rajasthan in the long run, thanks to the state's proximity to Kuno-Palpur National Park, the entry point of which is just 100 kilometers away from Sawai Madhopur.

Madhya Pradesh’s Kuno National Park, the new home of African cheetahs in India, is basking in its new-found global fame after eight cheetahs airlifted from Namibia were released in the wildlife sanctuary recently with much fanfare.

Experts feel that cheetahs are a new attraction in the country and if their translocation is successful, it will develop a new circuit in the region surrounding Ranthambore Tiger Reserve in Rajasthan. They say Karahal, the entry point of Kuno-Palpur National Park (KPNP), is just 100 kilometers from Rajasthan's tiger tourism hub Ranthambore and also the nearest railway junction is Sawai Madhopur.

"Tourism will definitely increase once the park is fully opened. Sawai Madhopur is the nearest train junction. It is one of the gateway points so definitely the footfall will increase after Kuno's success. Also, the new Delhi-Mumbai super highway will cross through Sawai Madhopur," Balendu Singh, Executive Member, Federation of Hospitality and Tourism of Rajasthan (FHTR) says.

Singh, who is a former wildlife warden, says in the next two years, a lot of people will invest in the region which will create employment and uplift the living of local people.

"One can understand from the fact that the land prices which were Rs 30,000-Rs 40,000 per bigha in Karahal of Madhya Pradesh are now available in several lakhs due to Project Cheetah," he says.

S R Yadav, Chief Conservator of Forest and Field Director, Ranthambore Tiger Reserve, says, "Ranthambore is the nearest location to Kuno National Park and is also an attractive tourist place. It is an assessment, but definitely it will leave a positive impact in the long run and increase footfall of tourists. A total of 20 cheetahs are sanctioned for Kuno National Park." According to tourism industry experts, approximately 5 lakh tourists travel to Ranthambore every year and there are more than 300 big and small hotels, whereas Sheopur of Madhya Pradesh is relatively fresh ground where hospitality sector investors are keeping a watch to expand their business.

"Whenever there is a new attraction, a certain group of enthusiasts comes to see it. So, with the success of Project Cheetah, in due course of time, new hotels, resorts and related industries will flourish. The project has just started, and people will only invest when they see its success and see the number of big cats increasing," Jaideo Singh Rathore, founder, Ikaki Bagh says.

However, tourist operator and wildlife photographer, Aditya Dicky Singh feels talking about 'cheetah tourism' and its immediate effect on Rajasthan tourism is too premature.

"For at least one year, people will not be allowed to enter Kuno National Park. It is still not sure whether these cheetahs will come out of their enclosures or not. It is too premature to talk about the footfall in Kuno Park and its effect on Rajasthan tourism," Singh said.

On September 17, eight cheetahs airlifted from Namibia -- five females and three males - were released in the Kuno National Park, putting the sanctuary in Sheopur district firmly on the world map.

Prime Minister Narendra Modi himself released three of these felines into a special enclosure in the park by operating a lever of the cages in which they were transported from the African country.