Along with passing the Moon, the James Webb Space Telescope also completed the first step in the Sunshield deployment phase. Read on for more details. 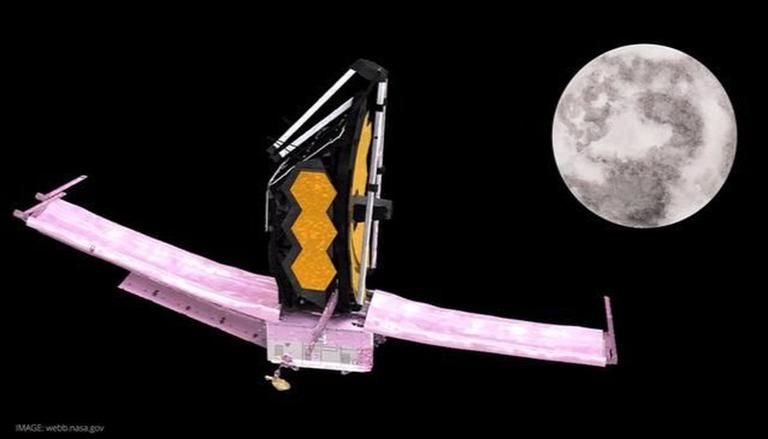 
The James Webb Space Telescope has now passed the Moon on its journey to the L2 within three days of launch. According to the 'Where is Webb' website created to track the telescope, it has completed about 38% of its journey by 5 pm on December 29, 2021. While the James Webb Space Telescope has travelled more than 340,000 miles from Earth, it still has to cover a long way to its destination.

Along with passing the Moon, the James Webb Space Telescope also completed the first step in the Sunshield deployment phase. The process began at 11:51 pm IST on December 28, 2021, and it took about seven hours until the completion at 05:57 am IST on December 29, 2021. In an official release, NASA says that "While the actual motion to lower the forward pallet from its stowed to its deployed position took only 20 minutes, and the lowering of the aft pallet took only 18 minutes, the overall process took several hours for each because of the dozens of additional steps required."

The forward AFT Sunshield has been deployed

The additional steps that NASA is talking about includes monitoring critical temperatures, turning on the heaters to keep the key components warm and configuring other software and equipment. The forward AFT Sunshield Pallet was successfully deployed on December 29 and NASA Webb Telescope confirmed this via a tweet at 12:22 am IST. Look at the graphical representation of the step given below. Additionally, the DTA structure will be deployed today, December 29, which will help in the thermal isolation and make room for the other membranes of the sun shield.

✅ Right now, we just successfully completed the first step: unfolding the forward sunshield pallet. Think of Webb’s pallets as a cake stand that will hold 5 layers of sunshield — the cake’s layers, if you will. 🍰

The James Webb Space Telescope is going to succeed the mighty Hubble Telescope and will help in discovering far-fetched secrets of the Universe. The Webb telescope is said to be about 100 times more sensitive or powerful than the Hubble Space Telescope and will help scientists gather more information about the initial stages of the formation of a star, the universe's earliest stages and details about other planets where life might be possible. Stay tuned for more updates on the James Webb Telescope.