NASA's Solar Observatory Catches The Sun 'smiling'; Here's How It Came To Be

NASA's Solar Dynamics Observatory captured an image of a 'smiling' sun. The agency explained that the features actually are spots releasing solar wind. 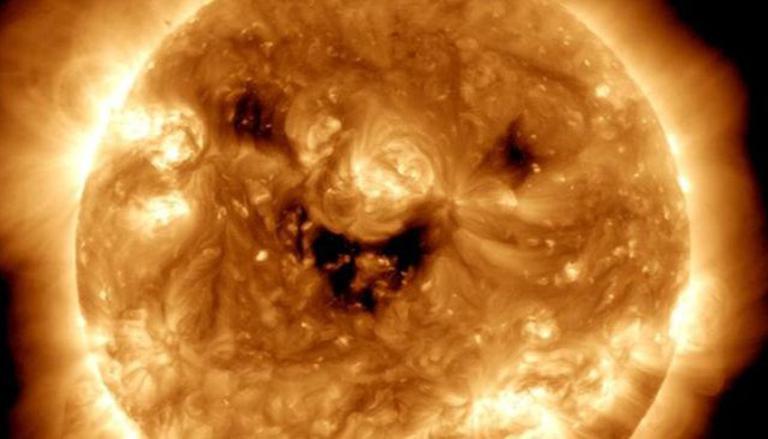 
NASA's sun-watching observatory fixated in space has captured a new image of Earth's nearest star in a rather 'amusing' state. Captured by the Solar Dynamics Observatory (SDO), the picture showcases the sun 'smiling' when observed in ultraviolet light. NASA explained on Twitter that the features resembling the sun's eyes and mouth actually are patches "known as coronal holes and are regions where fast solar wind gushes out into space".

Today, NASA’s Solar Dynamics Observatory caught the Sun "smiling." Seen in ultraviolet light, these dark patches on the Sun are known as coronal holes and are regions where fast solar wind gushes out into space. pic.twitter.com/hVRXaN7Z31

According to NASA, these sunspots are considered a precursor to solar flares which are intense bursts of ionised energy from the sun's surface. Scientists have also found that the number of sunspots on the solar surface increases as the sun heads toward the peak of its solar cycle which begins every 11 years.

Meanwhile, the SDO has acted as the 'unblinking eye' for NASA since its launch in 2010. Over the years, the observatory which is installed in an inclined geosynchronous orbit around the Earth how the Sun creates solar activity and drives space weather. "SDO’s measurements of the Sun-- from the interior to the atmosphere, magnetic field, and energy output-- have greatly contributed to our understanding of our closest star," NASA said in a statement.

The new picture from SDO amused a number of netizens who reshared the image but with a makeover. Many said that the picture looks like the sun children draw while many revamped it with the spirit of Halloween. Check out some of the tweets.

READ | NASA's next mission to carry cremated remains of late engineer in his honour; details here

Nasa are trying to outdo me by showing the sun smiling - which do we think is best?
Sun Smiling or Volcano Smiling?@NASASun #TwitterWar #Sun #Volcano pic.twitter.com/RYgctFV6RW

The sun wants to get in on the Halloween fun too! pic.twitter.com/YxQXKpuRWf