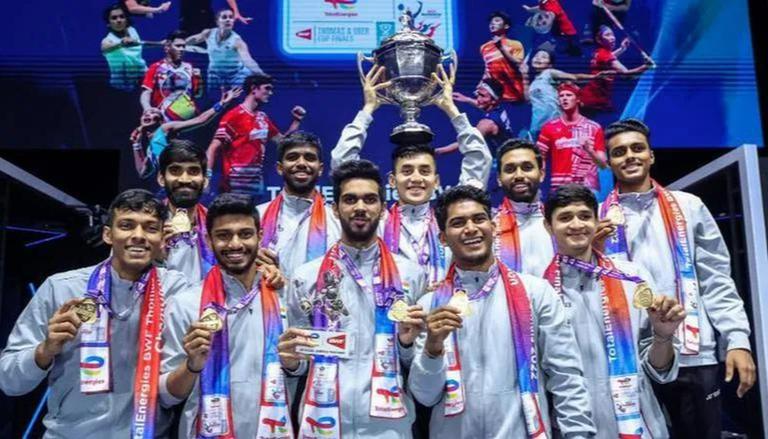 Double Olympic medallist Sindhu continued to excel with three titles -- Syed Modi International, Swiss Open Super 350 and Singapore Open Super 500 -- and capped the year with an elusive gold in Birmingham CWG before spending the rest of the season nursing an ankle injury.

But it was not just Sindhu's sensational show that defined Indian badminton this year as the men's players produced a series of gut-wrenching performances to not only achieve individual glory but also break the hegemony of China and Indonesia at the Thomas Cup in Bangkok.

If Sen secured his maiden Super 500 title and also bagged the CWG gold besides two final finishes, Satwik and Chirag made it their most successful year ever with two World Tour titles, CWG gold and a first-ever world championship bronze.

While Sen and Satwik-Chirag began the year with titles at the Indian Open Super 500, the 21-year-old from Almora went on to become the first Indian man after Pullela Gopichand to reach the finals of the All England Championships after another final finish at German Open.

However, the true moment of glory came a few months later in May when a group of men, led by HS Prannoy and Kidambi Srikanth, scripted an awe-inspiring run at Thomas Cup -- the world's most prestigious team event -- in Bangkok to return with first-ever gold.

If Srikanth displayed his 'icy-cool' demeanour en route to six successive wins, Prannoy fought through the pain of a twisted ankle as the duo inspired the group to a historic triumph.

Sen came good in the finals, while Satwik-Chirag also produced lion-hearted performances to play a pivotal role in the memorable win.

The celebration of this historic feat was not yet over when Indian shuttlers scripted yet another jaw-dropping show in Birmingham, returning with six medals, including three golds, a silver and two bronze medals in August.

While Sindhu finally captured the gold medal, Sen and Satwik-Chirag too scooped up the yellow metals in their first and second attempts respectively in what is still the early stages of their careers.

Srikanth, a gold medallist in 2018, couldn't go all the way this time and managed a bronze, while the women's doubles pairing of Gayatri Gopichand and Treesa Jolly claimed a maiden bronze but India missed the gold in the mixed team competition and settled for a silver.

Satwik-Chirag continued to soar higher in the second half as they achieved another milestone, becoming the first Indian men's pair to win a bronze medal at the World Championships in Tokyo.

The duo scripted another creditable show in Paris when they secured their maiden super 750 title at French Open, again the first Indian pair to do so.

The year was also a successful one for Prannoy, who emerged as the most consistent Indian player in the circuit with seven quarterfinals, two semifinals and a runner-up finish at the Swiss Open.

Even though a title eluded him, Prannoy's consistent run saw him qualify for the season-ending BWF World Tour Finals and also earn him a nomination for the BWF Player of the year award.

The 30-year-old from Kerala finished in the group stage in Bangkok but not before stunning world number one and Olympic champion Viktor Axelsen in his last match.

The junior Indian players also hogged the limelight with Sankar Muthuswamy securing a silver medal at the World Junior Championships and also became the world number one in the boys' singles.

Unnati Hooda also showed early signs of her prowess with a BWF title at the age of 14 when she claimed the Odisha Open in January.

Hooda also finished second-best at India Junior International Grand Prix in September, before becoming the first Indian to win a silver medal in the women's singles at the U-17 event at Asia Junior Championships in Thailand.

The para shuttlers were also not far behind as reigning Paralympic gold medallist Pramod Bhagat secured his fourth gold in singles at the World Championships, which also saw the emergence of Manisha Ramadass as she claimed the top prize in women's singles.

With the Olympic qualification race beginning, 2023 is likely to see more fireworks from the Indian stars as they fight to make the cut for the Paris Games. PTI AT AT