Here is a look at the Indian team's historic dream run as they defeated several heavyweights and former champions en route to the Thomas Cup 2022 title. 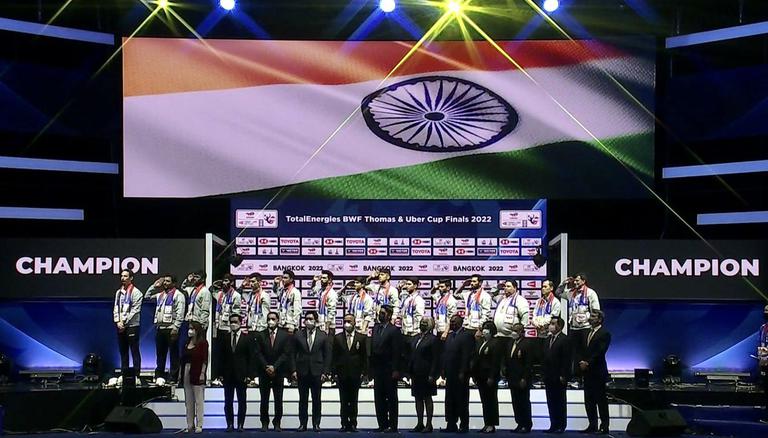 
Team India scripted history at the Thomas Cup 2022 by lifting their maiden title with a dominant 3-0 victory in the final against 14-time champions Indonesia. While the men's team won the competition in emphatic fashion, it is important to note that they entered as the underdogs. Here is a look at the team's dream run as they defeated several heavyweights and former champions en route to the title.

Team India began the Thomas Cup by competing against Chinese Taipei, Germany and Canada in the group stages. The team kickstarted the competition with an emphatic 5-0 win against Germany before registering a similar scoreline against Canada. However, it did face a stutter when it lost 3-2 to Chinese Taipei in its final group stage game. Despite losing out on the top spot in the group stage, it did not stop the Indian team from continuing its dream run.

Team India confirmed its place in the first semi-final of the Thomas Cup in 43 years by defeating five-time champions Malaysia 3-2 in a thrilling quarter-final on May 12. After the quarter-final was tied at 2-2 at the end of both the singles and the two double matches, HS Prannoy ended the proceedings by defeating Leong Jun Hao 21-13, 21-8 to help India reach only its fourth semifinal. Previously, India had reached this stage in 1952, 1955 and 1979.

Similarly to the quarter-final, the semis was also far from easy as the Indian team had to grind and showcase tremendous amount of mettle to produce a comeback to defeat a dominant Danish team. Denmark took an early 1-0 lead after Viktor Axelsen defeated Lakshya Sen 21-13, 21-13.

Soon after India's best doubles pairing of Satwiksairaj Rankireddy and Chirag Shetty defeated Astrup and Christiansen 21-18, 21-23, 22-20, in what was a cracking three-set nail-biting thriller. WItht he scores tied at 1-1, India then took the lead after former world number one Kidambi Srikanth defeated Andres Antonsen.

WE DID IT. We Are INDIA. 🇮🇳 #Champions #ThomasCup2022 pic.twitter.com/FiBdgrS8Iu

In the second doubles match, Indian duo Vishnuvardhan Goud Panjala and Krishna Prasad Garaga lost their clash to Rasmussen and Frederik Sogaard, which allowed Denmark to tie the score at 2-2. With the match heading to a decider, all the weight fell on HS Prannoy's shoulders. Prannoy battled through injury in the match to defeat Gemke despite dropping the first game to help India reach a historic final.

While the final result seems straightforward on paper with India registering an emphatic overall 3-0 win against 14-time champions Indonesia, the individual matches were fiercely competitive. India began the final with 20-year-old Lakshya Sen defeating world number five Anthony Sinisuka Ginting 8-21, 21-17, 21-16 despite having a slow start to the game.

Sen's performance was followed up by the doubles pairing of Satwiksairaj Rankireddy and Chirag Shetty demonstrating their nerves of steel to not only save four match points in the second game, but to go on and defeat the Indonesian duo of Kevin Sanjaya Sukamuljo and Mohammad Ahsan by a scoreline of 8-21, 23-21, 21-19.

Thank You for your words of encouragement sir. It was indeed a pleasure to speak to you over a call after our historic triumph. This is for India! Bharat Mata ki Jai! 🇮🇳 #ThomasCup2022 https://t.co/zYGsd7XscW

Following a 2-0 lead in the Thomas Cup final, the stage was set for former world no.1 Kidambi Srikanth to get India over the line using all his experience and skill. The 29-year-old produced a dominating performance as he beat Jonathan Christie 21-15, 23-21 in just 48 minutes.

As a result of a flawless display of skill and nerves, the Indian contingent comprising of Lakshya Sen, Kidambi Srikanth, HS Prannoy, Satwiksairaj Rankireddy & Chirag Shetty, and Vishnuvardhan Goud Panjala & Krishna Prasad Garaga, have set the stage for more success in the future.