Saina Nehwal, Kidambi Srikanth's Olympic Dream Set To Be Shattered; Here Is Why

Saina Nehwal and Kidambi Srikanth are yet to qualify for Tokyo Olympics but following the current COVID-19 circumstances the road to Tokyo is a distant dream. 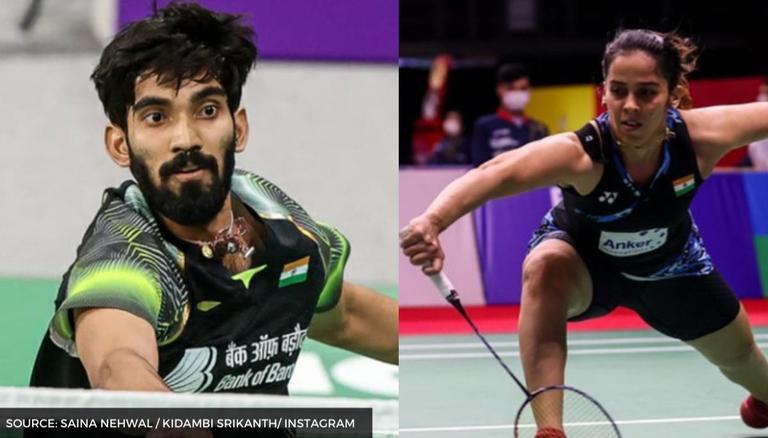 
The COVID-19 pandemic continued to be a big hurdle for India's ace shuttlers Saina Nehwal and Kidmabi Srikanth in their bid to make the cut for the upcoming Tokyo Olympics 2021. However, it looks like the Olympic qualification will now remain only a dream following the recent announcement made by the Badminton Association of India.

According to a report on Republic World, Badminton Association of India (BAI) in a press release informed that the Sports Ministry of India through the Ministry of External Affairs had reached out to the Malaysian government to permit the Indian Badminton Team to travel to Malaysia and participate in the  Malaysian Open 2021 tournament. However, the Malaysian authorities did not comply with the request due to the COVID-19 situation in the country.

On Thursday, India's badminton body wrote on its Twitter handle that it has written to members of both Malaysia and Singapore about considering the request for the Indian badminton team's participation in both tournaments as a special case. The matter has also been taken to the Badminton World Federation.

Even the PTI had reported that the Indian government was negotiating for the Indian badminton team's participation in the Malaysian Open 2021 despite the ban on flights from the country. The tournament is scheduled to take place from May 25 to 30, but currently, there is a temporary travel restriction imposed by the local government due to the current COVID-19 situation in India as the country battles the second wave of the COVID-19 pandemic.

STATUS of Travel to🇲🇾
"Indian nationals won’t be allowed in Malaysia as well as in Singapore, this is already in public knowledge. This is why we had written to both the Member Countries to consider our request as a special case with respect to the Olympic qualification...1/2

The pandemic had disrupted the BWF calendar last season and continued to do so this year as well, forcing India's badminton body to cancel or postpone most of the tournaments and also come up with a new Olympic qualifying period. The participation of Indian shuttlers at the Malaysian Open was essential keeping the Tokyo Olympics in mind. Until now only PV Sindhu, B Sai Praneeth and the men’s doubles pair of Chirag Shetty and Satwiksairaj Rankireddy have punched their ticket to Tokyo Olympics.

Following the postponement of this year's Indian Open, the Malaysia Open and the Singapore Open (June 1-6) were the only two events that gave hope to Saina Nehwal and Kidambi Srikanth's Olympic qualification chances. However, with Malaysia not permitting participation, the hopes of qualification are done and dusted. The Indian contingent who were due to participate in Malaysian Open 2021 had all the top Indian singles and doubles players like PV Sindhu, Saina Nehwal, Kidambi Srikanth, Sai Praneeth, Satwiksairaj Rankireddy, Chirag Shetty, Ashwini Ponnappa and Sikki Reddy.

Recently, the Saina Nehwal biopic was given a digital release after a month of its theatrical release. The film was released in theatre on March 26, while the digital release was done on Amazon Prime Video on April 23, 2021, and is available to watch for Amazon Prime users only. The film stars Parineeti in and as Saina. Apart from her, the film also stars Manav Kaul as Pullela Gopichand, Eshan Naqvi as Parupalli Kashyap, Meghna Malik as Usha Rani Nehwal in pivotal roles. Actors such as Subhrajyoti Barat, Ankur Vikal, Tawhid Rike Zaman, Sharrman Dey and Sameer Bassi feature in supporting roles.

WE RECOMMEND
Pullela Gopichand to use new brand endorsement to make badminton 'Sport For The Masses'
Saina movie available on Amazon Prime Video, here's how you can watch the film
Neha Kakkar becomes Parineeti Chopra's 'fan again' as she reviews her sports film 'Saina'
RCB team 2021 star Washington Sundar's THIS conversation with Saina Nehwal wins over fans
India forced to withdraw from Malaysian Open Badminton due to COVID travel restrictions