GSW vs MIL Dream11: Golden State Warriors will square off against Milwaukee Bucks in the 2019-20 NBA season. The teams will face each other at Chase Center.

Golden State Warriors will square off against Milwaukee Bucks in the 2019-20 NBA season. The teams will face each other at Chase Center in San Francisco on Tuesday night (Wednesday, January 9, 8: 30 PM IST). You can also play the GSW vs MIL game on the fantasy gaming app – Dream11. Here are the GSW vs MIL Dream11 predictions, squad details and player performances.

Golden State Warriors currently occupy the last position in the Western Conference. They have played thirty-eight matches so far. They've won 9 matches and lost 29 matches. They played their last match against the Sacramento Kings. They lost the game by a 98-111 margin. With injuries to key players, the team failed to put up a good performance. Due to this, they won't be making it to the playoffs this season. Against Milwaukee Bucks, GSW will have to play out of their skins to cause an upset.

Milwaukee Bucks sit comfortably at the top of the Eastern Conference table. They have played a total of 38 matches. Out of which, they've won 32 and lost 6. Bucks will be coming into the match after losing to San Antonio Spurs 118-127. Apart from losing the last game, the team has been dominant in the entire season so far. They will look to do the same over struggling Warriors. 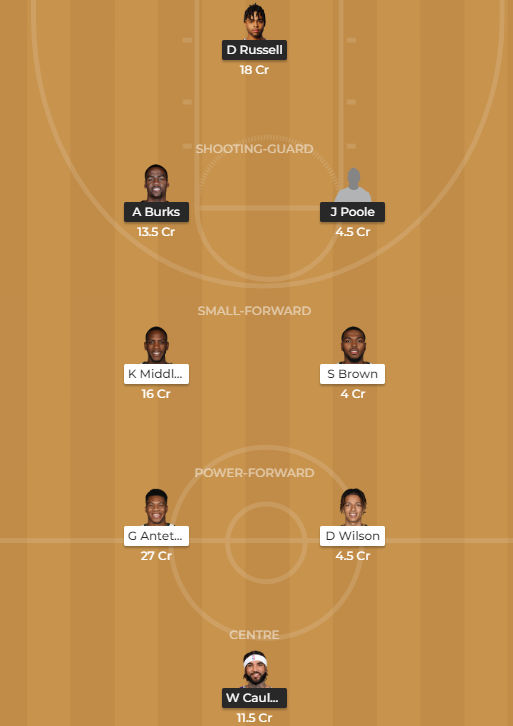 Milwaukee Bucks are clear favourites to win the contest

Note - The GSW vs MIL Dream11 prediction are our own and do not guarantee positive results in your games.