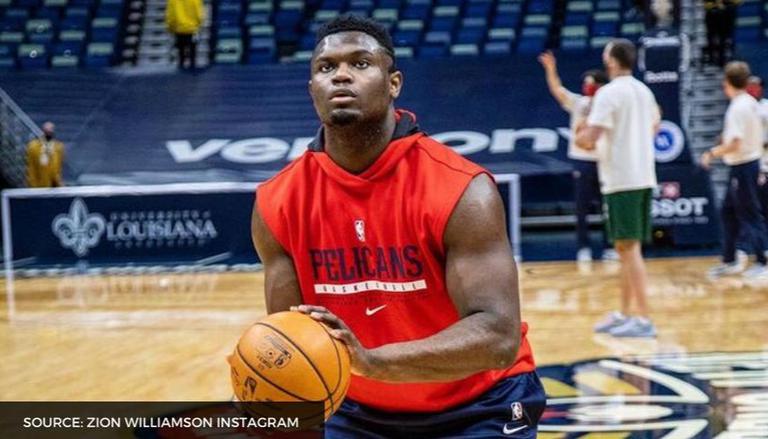 With a slightly unfortunate situation, Zion Williamson has been sidelined for an indefinite period of time. The New Orleans Pelicans have found themselves in a fix, playing without Brandon Ingram and Williamson during a crucial period of the season. Despite that, the Pelicans won their last game vs the Charlotte Hornets, still keeping their hopes of the play-in tournament alive. Here is more on the Zion Williamson injury and whether - 'Is Zion Williamson playing tonight?'

According to recent reports, the answer to the question of when is Zion Williamson coming back is not during the Memphis Grizzlies match. The Grizzlies vs Pelicans game is scheduled on Monday, 8:00 PM EST (Tuesday, 5:30 AM IST) at the FedExForum in Memphis, Tennessee. The team will also be playing without Brandon Ingram, Josh Hart and Steven Adams.

Breaking: Zion Williamson is out indefinitely with a fractured left ring finger, the team announced on Friday. pic.twitter.com/wMME8sdypV

As per the team's announcement, the Zion Williamson return continues to be uncertain with his fractured left ring finger. While Williamson was out for the first half of his highly-anticipated rookie season, he was playing quite consistently in his second campaign. This season, he has played 61 of the Pelicans' 66 games this season. Williamson was averaging 27 points per game, showing a good mix of his offensive and defensive skills.

However, Ingram and Williamson's injuries has brought along a couple of controversial statements. As per David Griffin – the Pelicans executive vice president of basketball operations – the league and officials are responsible for Williamson's situation. Griffin described the injury as a "fairly significant situation", especially since the two-year forward.

READ | NBA playoffs picture after May 9 results: Lakers, LeBron to face Curry and the Warriors?

"I'm really frustrated because this was avoidable. We told the NBA through every means available to us, through sending in film, through speaking to everybody in the officials department and everybody in basketball operations, that the way they were officiating Zion was going to get him injured," Griffin said.

Griffin did not mince his words, adding that Williamson is "mauled in the paint on regular basis", where other players have told him it would keep happening as "they don't call it". He compared the situation to Shaquille O'Neal in the 2000s, saying, "There's more violence encouraged in the paint against Zion Williamson than any player I've seen since Shaq. It was egregious and horrific then, and the same is true now". Griffin was fined $50,000 for his comments.

Not only have the Pelicans lost Williamson to injury, but Ingram will also be out with a left ankle inversion sprain. Though the team needs their two star players to be healthy, this affects their already few chances to make the playoffs. Pelicans fans agreed to what Griffin had to say, adding that Williamson's injury is a disappointing result to the 20-year-old's season.