Philadelphia 76ers star Joel Embiid got a new nickname 'Do a 180' by a contestant on a US game show. Embiid took to Twitter to acknowledge his new nickname.

'Do a 180' is now one of the most trending phases on social media after a hilarious fail on a US game show landed 76ers star Joel Embiid his new nickname. Embiid, who is nicknamed 'The Process' by his supporters, even acknowledged the bizarre nickname on Twitter. 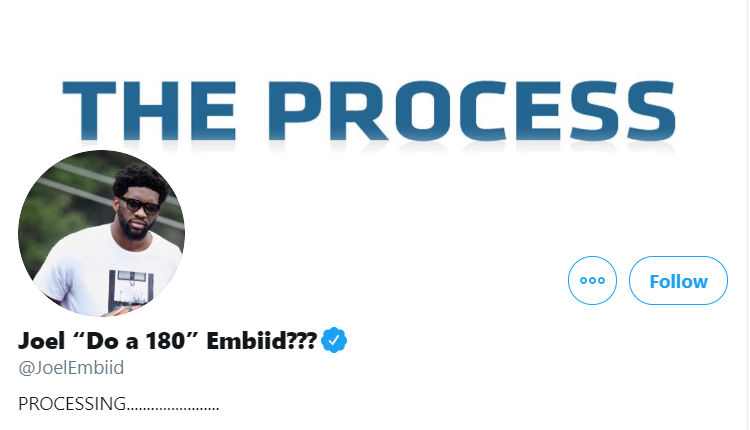 Joel Embiid nickname: Joel Embiid The Process or Joel 'Do a 180' Embiid?

During Wednesday night's (Thursday IST) episode of Jeopardy!, Philadelphia 76ers center Joel Embiid was one of the topics for the highest-value questions (worth $1,000). The question was to see if the contestants could identify Embiid's nickname with a clue provided that read 'Joel Embiid in 2019 won the trademark for this nickname of his that also describes the 76ers’ strategy of improving the team.'

Joel "do a 180" Embiid > "The Process"pic.twitter.com/obkkkSW6vF

One of the contestants' named Paul, quickly jumped with a bizarre guess stating 'What is 'Do a 180'?' While it was undoubtedly a wrong answer, the nickname soon got the attention of NBA fans, who responded with some hilarious reactions.

The creators of the show were looking for the answer 'The Process' based on the "Trust The Process" mantra by former 76ers general manager Sam Hinkie. However, the new nickname was gladly acknowledged by Embiid after the center instantly changed his name on Twitter that contained his rechristened nickname.

Joel Embiid even posted a video of him hitting the '180' move on the court. You can check it out here:

While the Joel Embiid nickname caught a lot of wind, 76ers fans are still wondering 'When will Joel Embiid play again?'

The 76ers are currently struggling after injuries to key men has somehow derailed their campaign. With Ben Simmons already ruled out, Joel Embiid joins him on the sidelines after the Cameroonian injured his left shoulder. The Cameroonian star collided with Cleveland Cavaliers' Ante Zizic during an upset 108-94 loss last Wednesday.

Also Read | Joel Embiid Could Be Traded First By The Philadelphia 76ers Ahead Of Ben Simmons: Reports

It was initially feared that Embiid could face a lengthy spell on the sidelines, but NBA insider Adrian Wojnarowski reported that Embiid just sprained his shoulder and should be out for at least a week. Embiid has already missed three games as 76ers are 1-2 (win-loss) without him. Embiid should also miss 76ers' game against Sacramento Kings on Thursday night (Friday IST).