LAL vs PHX Dream11: Los Angeles Lakers and Phoenix Suns are all set to face off in NBA 2019-20 regular-season game. Both the teams will face at Staples Center.

Los Angeles Lakers and Phoenix Suns are all set to face off in an NBA 2019-20 regular-season game. Both the teams will square off at Staples Center on Monday night (Tuesday morning, February 11 at 9:00 AM IST). You can play the LAL vs PHX match on the fantasy gaming app – Dream11. Here are the LAL vs PHX Dream11 predictions and squad details

The Los Angeles Lakers are currently leading the head-to-head record between the two teams this season. So far, they have won their previous two games. The LAL side currently occupy the top spot in the Western Conference. They have played 52 games so far in the league. Out of which, they have won 39 games and lost 12 games. Their previous game was against the Golden State Warriors which they won with a scoreline of 125-120. The team, led by LeBron James and Anthony Davis, are favourites to win the NBA Championship this season. They will certainly look to continue their winning momentum to strengthen their position at the top.

Meanwhile, Phoenix Suns occupy the 13th position in the Western Conference. They have played 53 games so far in the series. Out of which, they have won 21 games and lost 32 games. They played their last game against the Denver Nuggets which they lost by a 108-117 margin. In spite of losing their previous game, Suns will be looking to upset Lakers on their court. They will look to move up the points table. 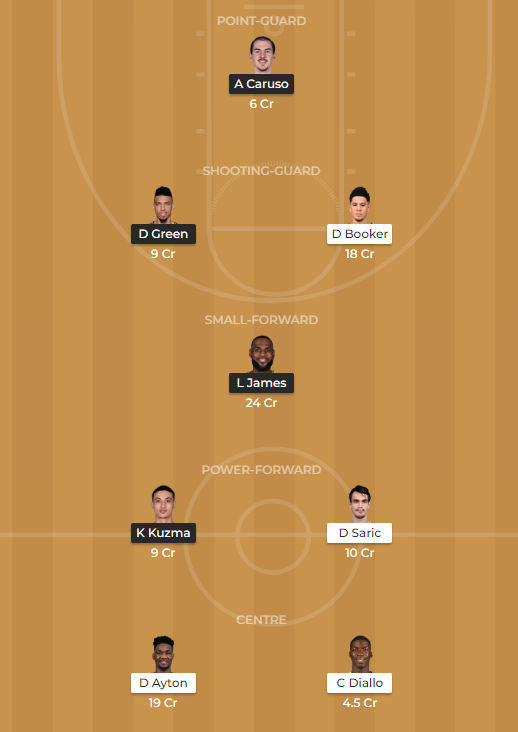 Lakers are favourites to win the game

Note - The  LAL vs PHX Dream11 prediction is our own and does not guarantee positive results in the game.