Lakers superstar LeBron James was slammed on social media for his desperate attempt to win a flagrant foul after Draymond Green's tackle on him on Wednesday. 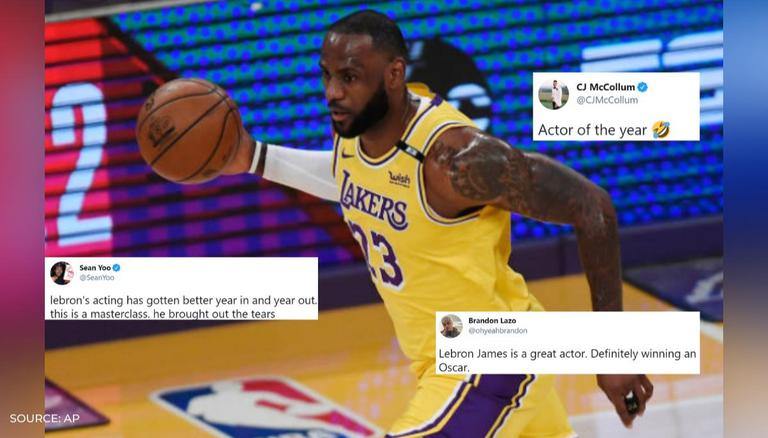 LeBron James scored the game-winning three-pointer as the LA Lakers eked out a 103-100 win over the Golden State Warriors in Wednesday’s play-in game at the Staples Center. The victory for Frank Vogel’s side ensured that the Lakers clinched the No. 7 seed in the West and hence, made it to the playoffs. However, during the game, fans on social media slammed James for his play-acting in a bid to receive a flagrant foul after being struck in the face by Warriors star Draymond Green.

The Los Angeles Lakers won one of the most highly-anticipated play-in game of the season in incredible fashion, and their reward is a first-round clash with Chris Paul and the Phoenix Suns. Lebron James made a long, go-ahead three-pointer with 58.2 seconds remaining, rallying the Lakers to a 103-100 victory, despite another impressive scoring performance from league leader Steph Curry. The Warriors will now have to win against the Grizzlies on Friday if they are to grab the final playoffs spot in the West.

In the final minutes of Wednesday night's play-in tournament game, Lakers forward LeBron James appeared to be poked in the eye by Warriors star Draymond Green during a layup attempt. The 17-time All-Star remained down on the court for a long while as officials reviewed whether a flagrant foul had been committed. A flagrant would have given James free throws and the Lakers possession however, the verdict from the referees was that no flagrant call was necessary and that it was just a normal foul.

READ | LeBron James net worth vs Steph Curry net worth: Who is richer out of the two NBA stars?

Actor of the year 🤣

Fans on social media were then quick to slam James and labelled the four-time NBA champion an 'actor' for trying to pretend that he was hurt. Trail Blazers star CJ McCollum also called out the Lakers star for his desperate attempt to try and win a flagrant foul. "Actor of the year (laughing emoji)," McCollum tweeted while LeBron was writhing on the ground.

lebron's acting has gotten better year in and year out... this is a masterclass. he brought out the tears

In a postgame interview with ESPN, LeBron spoke about the game-winner that he scored with less than a minute remaining but admitted that he had blurred vision after Green struck his face. He said, “After Draymond, finger to the eye, I was literally seeing three rims out there so I just shot at the middle one. And I was able to, with the grace of the man above, I was able to knock it down.”

The first round of the 2021 NBA Playoffs will begin on Saturday, May 22. As the State Farm NBA Play-In Tournament progresses, the complete first-round Playoffs schedule will be announced. Here's a look at the NBA playoffs bracket in the West:

READ | Warriors vs Lakers sees Drake and Michael B. Jordan in attendance as LeBron James dazzles