NBA box score: Giannis and Middleton combined for 68 points in a Game 3 win for the Bucks; Mitchell went for 37 points as Utah took a 2-0 lead in the series. 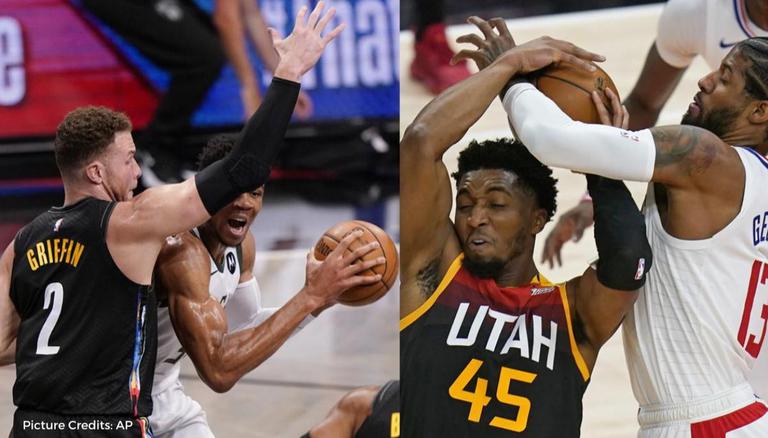 NBA Box score: Middleton leads the Bucks to a 86-83 win, Clippers down 2-0 against Jazz


The Milwaukee Bucks have made their way back into the series against the Brooklyn Nets with a win in Game 3 of the NBA Playoffs 2021. Khris Middleton's clutch free throws sealed the win for the Bucks in a low scoring game that ended 86-83 in favour of the Bucks. Coming to the Western Conference semis, Donovan Mitchell once again proved to be the difference as the young guard scored 37  points, shooting at a  51.7% shooting efficiency. Clippers once again trail in their Playoff series and will be hoping to play better basketball in Game 3 at Staples Center to stay in the series. Here are the Nets vs Bucks highlights, Clippers vs Jazz highlights, NBA results and NBA box score from Thursday.

Milwaukee Bucks had a fantastic 1st quarter, they scored 30 points while containing the Nets to only 11, but the second quarter did not go as planned and the Nets came back into the game reducing the Bucks' lead to only 3 points going into halftime. Khris Middleton was outstanding on the night and his brilliance in the 4th quarter helped the Bucks to get the win. Middleton and Giannis Antetokounmpo combined for 68 of the 86 points scored by the Bucks. Game 4 is going to be crucial for Milwaukee as a win there would tie the series which would be perfect for them with the series moving to Brooklyn for Game 5.

The Nets have played better defense this series than they ever have this season. Bruce Brown has been instrumental in the defensive end and he has looked great this series. Kevin Durant once again scored 30 points, he helped them take a lead with less than 2 minutes to play, but the lead was cancelled out after a Jrue Holiday spin move to the basket followed by Middleton's clutch free throws.

The Clippers showed toughness and made a stunning comeback into the game after trailing by almost 13 points at the end of the 2nd quarter. Reggie Jackson showed up brilliantly in the second half, leading the Clippers to close down the lead. Utah Jazz kept racking 3 pointers and set a franchise playoff record of 20  made 3s in the game. Bojan Bogdanovic was phenomenal on the defensive end and did really well to keep Kawhi Leonard quiet in the second half. After losing their lead for the first time in the 4th quarter, Utah came back strong to complete a 117-111 win in Game 2 of the NBA Playoffs 2021. Paul George had 27 points on the night while shooting 44.4% from the field. Game 3 and 4 will be played at  Staples Center and the Clippers will be hoping for better results at home which will help them get back in the series.