Kyrie Irving's current vaccine status is still unknown with the basketball star unable to attend the Brooklyn Nets' media day due to COVID-19 protocols in city. 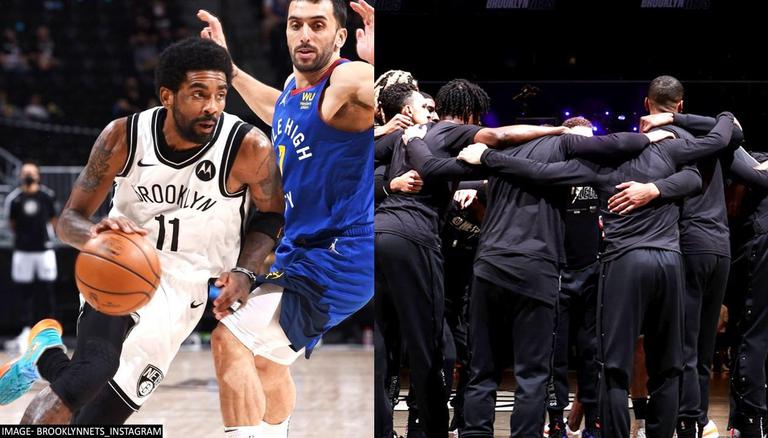 
Problems seem to be mounting for Brooklyn Nets star Kyrie Irving with the player missing the team practice session in Brooklyn. The point guard missed the practice session due to New York city's COVID-19 vaccination protocols. New York has a mandate requiring COVID-19 vaccinations for athletes who play in or practice in the city. Kyrie Irving's current vaccine status is still unknown with the basketball star was unable to attend the Brooklyn Nets' media day. He spoke via Zoom through a monitor set up in the interview room at Barclays Center.

Speaking about Kyrie Irving missing Brooklyn Nets practice session, coach Steve Nash said,  "We support him. We are here for him. Things change. When there's a resolution, we're here for him. I'm not really worried about anything. We're just trying to work every day. We came in today and had a great practice and we'll do the same tomorrow, and that's kind of where I leave it."

The National Basketball Association (NBA) has announced that the players who are not vaccinated are set to lose millions of dollars the decision which is likely to affect Brooklyn Nets star Kyrie Irving. According to the Guardian local laws in cities such as New York and San Francisco prohibit the unvaccinated from certain public places, including indoor sports areas. That means unvaccinated players for teams such as the Brooklyn Nets and Golden State Warriors would not be able to participate in home games.

Players who are yet to receive COVID-19 vaccination or have refused to take one ahead of the upcoming 2021-22 season will be required to follow many of the same restrictions that were imposed during the previous edition of the competition. According to ESPN, players who have been fully vaccinated will not have to undergo daily testing. The rule also implies to coaches and support staff members, who have been mandated to take both shots of vaccine ahead of NBA resumption. Fully vaccinated players will enjoy far more freedoms than unvaccinated players.

However, players who have refused to take vaccines will have to undergo daily testing otherwise they will not be allowed to enter training facilities and mingle with other members of their team. Unvaccinated players must also undergo lab-based testing ahead of their match as they did in the previous edition. Unvaccinated players are also not allowed to enter dining room areas and eat with fully vaccinated members of the team. They will be required to stay 6 feet apart from fully vaccinated personnel and will also have to wear face masks all the time.

WE RECOMMEND
NBA: What can Kyrie Irving, Andrew Wiggins end up losing this season? All you need to know
NBA COVID-19 rules explained: What are the rules for vaccinated and unvaccinated players?
NBA star Bradley Beal caught playing 'rock, paper, scissors' with fan mid-game: Watch
Unvaccinated NBA players to lose millions of dollars in salary for missing games
NBA denies exemption request to unvaccinated Andrew Wiggins
Listen to the latest songs, only on JioSaavn.com