A Houston Rockets rookie player was seen gifting his shoe to a young Basketball fan in the audience, in a video that is recently going viral on social media. 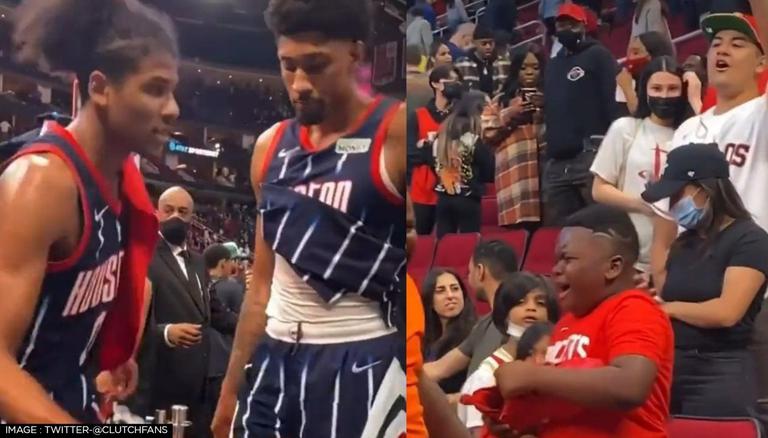 
American basketball player Jalen Green is currently playing in his rookie season in the National Basketball Association (NBA) with the Houston Rockets team. He is currently shooting better than 50% from long range, ever since he returned from his hamstring injury.

The 19-year-old player returned a total of 16 points during the NBA 2021-22 clash with Miami Heat on New Year's eve, although the team lost the match 110-120. Meanwhile, apart from his performance, Green also made headlines for a special gesture towards a young fan of the Rockets, which in turn left the fan teary-eyed.

As per a report by abc30.com, the young fan goes by the name of Gavyn McConnell, and Green went out of his way to engage with him by gifting him a shoe of his. Gavyn was elated on receiving the shoe and was seen in tears, being overwhelmed with the gesture by Green. The kid has been going to the Houston Rockets matches ever since he was four years old with his father Martreal.

Rockets rookie Jalen Green gifts his shoe to a young fan and his reaction is priceless. Classy move by @JalenGreen. pic.twitter.com/5tm1H8R9FZ

What did Gavyn's father say about Jalen Green's gesture?

Meanwhile, Martreal expressed his thoughts on his son receiving the shoe from his favorite player. As per abc30.com, he said, "He actually tried to throw him his shoe to sign, but Jalen being the type of man that he is, gave him his shoe off his foot so it was actually a nice moment and a nice genuine gesture. We're going to put it in a case and continue to go to games, try to become season ticket holders and get him to sign it."

Having joined Houston Rockets in the 2021-22 season, Green currently averages 15.5 points, 2.9 rebounds, and 2.3 assists per game for the team. He has played a total of five matches in the season, with the best effort of scoring 29 points against the Denver Nuggets on January 1, 2022. He also amassed 24 points playing against the Los Angeles Lakers and 20 points against the Indian Pacers.