NBA Scores: Bucks Tie The Series After 107-96 Win Over The Nets, Suns Sweep The Nuggets

NBA scores latest: The Bucks and Suns were two teams that came out with flying colours on Sunday, making the NBA playoffs more thrilling than ever. 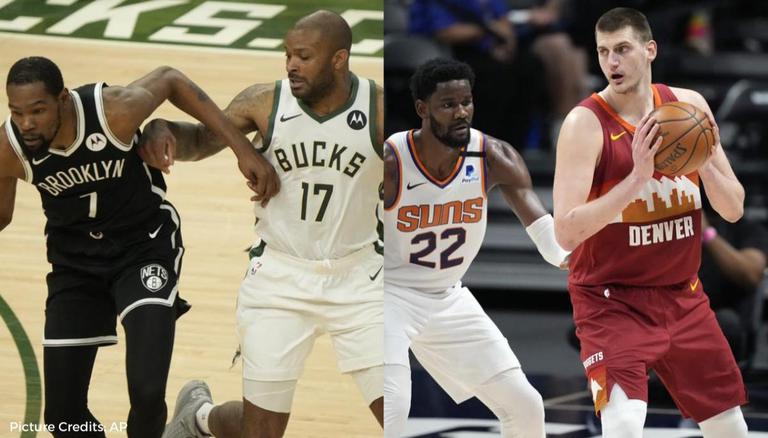 NBA scores: Bucks tie the series after a 107-96 win over the Nets, Suns sweep the Nuggets


Milwaukee Bucks have managed to tie their series against the Nets, after displaying an amazing performance in Game 4 led by Giannis Antetokounmpo, who scored 34 points on the night, leading the Bucks to a 107-96 win over the Nets. In the Western Conference, Phoenix Suns completed a sweep over the Nuggets after a 125-118 win over the Nuggets in Game 4, which means that they will play their first conference finals since 2010. Here is more on the NBA scores, highlights and results from NBA Playoffs 2021.

The most exciting matchup of the NBA Playoffs 2021 has lived up to its expectations so far, as the series is now all tied leading to Game 5 in Barclays Center. The Nets suffered another setback after Kyrie Irving suffered a sprain on his right ankle which probably leaves him out of the remainder of the series. After the injury to Irving, the Nets did not look the same as the Bucks played some brilliant defense making it difficult for Kevin Durant and his teammates to make shots. With 2 of their superstars out, Steve Nash will have to go deep into the bench for the remainder of the series and players like Bruce Brown, Joe Harris, Mike James will all have to step up if the Nets want to make it into the next round of the NBA Playoffs 2021.

The Greek Freak in Game 4:

Milwaukee Bucks showed amazing character in their Game 3 and 4 victories over the Nets. Despite being 0-2 down, the Bucks fought really hard and played great defense which made it difficult for their opponents to get buckets. Giannis scored 34 points for the Bucks while shooting 53.8% from the field. It was all about getting to the rim for the Greek freak as he kept getting there and scoring the points, helping his team win. The Buck now have a major shot at winning the series after two of the Nets superstars are out injured but they will have to continue their brilliant defense on Kevin Durant because he alone is very capable to change the game and with reports emerging about James Harden getting back to training, nothing is certain yet in this clash between the heavyweights.

After a year of brilliance from Nikola Jokic, Denver Nuggets went down 0-4 to the Phoenix Suns. Game 4 saw Jokic getting ejected after his foul on Cameron Payne in the 3rd quarter, which was pretty much the end for the Nuggets who lost the game 118-125. Denver pushed for a comeback in the 3rd quarter but Phoenix kept racking points and made it difficult for the Nuggets to get back into the game.

Chris Paul was a joy to watch on the night as the 36-year-old scored 37 points on the night while shooting at a brilliant 73.7% from the field, making it to the latest NBA highlights with ease. His addition has completely changed the fortunes of this team leading them to their first playoffs appearance since 2010. Going into the Conference finals, CP3 will be a key player for the Suns, as his IQ and playmaking will come in very handy for them. The backcourt duo he has formed with youngster Devin Booker has been absolutely stunning and the Suns will be hoping that they continue their brilliance deeper into the Playoffs.

Other NBA Results from Sunday