Nuggets Vs Suns Box Score: Phoenix Knock Nuggets Down In Game 2 With 123-98 Win

Nuggets vs Suns box score: Phoenix spoil Jokic's MVP celebrations as they beat the Nuggets 123-98 in Game 2 of the Western Conference semis. 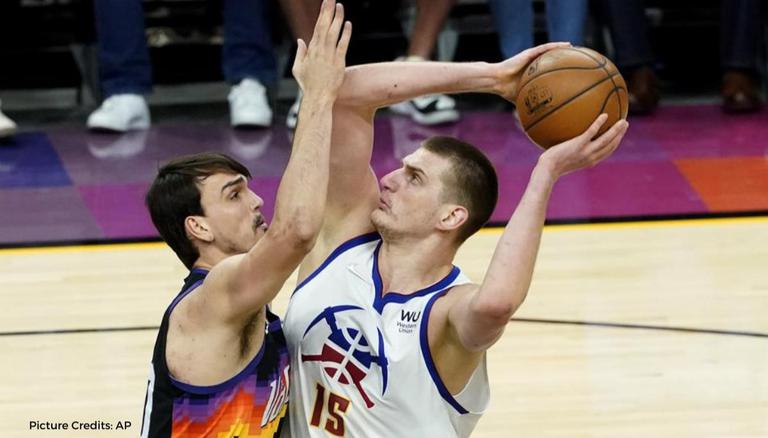 Nuggets vs Suns box score: Phoenix knockdown the Nuggets in Game 2 with a 123-98 win


Phoenix Suns came out victorious in their Western Conference Semis against the Denver Nuggets, they beat their rivals 123-98 in Game 2 of the  NBA Playoffs 2021. Phoenix looked like the better team right from the start, all their players kept firing right from the first quarter. Denver on the other hand had a disappointing outing their only positive was MVP Nikola Jokic who scored 24 points in the 34 minutes he played on the night. Michael Porter Jr injured himself during the game but kept playing with not much of an impact. Both the teams decided to rest their starters, keeping the rest of the series in mind. Here are  the Nuggets vs Suns box score, NBA scores and Nuggets vs Suns highlights.

These games were for our fans! Thanks for showing up and showing out Phoenix!

Phoenix Suns had a phenomenal night from the 3 point range shooting 18 threes at a 47.4% efficiency. Devin Booker was once again brilliant and scored 18 points on the night while shooting 42.9% from the field. Chris Paul showcased a masterclass on the night as he dropped 17 points and 15 assists leading the Suns to a blowout win in Game 2. With the series now moving to Ball Arena, the Suns will have to continue their explosiveness on the court because the crowd in Denver is going to be loud and electric making things difficult for the Suns and the Nuggets have proven in the past that they are capable of making a comeback.

Game 2 was a defensive letdown for the Nuggets. They never were able to stop the Suns from scoring those 3 pointers and they themselves shot only 32.6% from beyond the arc. Except for Jokic all the other Nuggets players had a bad day on the offence. The whole team managed to shoot only 40% from the field which led to the largest defeat of the season for the Nuggets. The Joker will be receiving the MVP trophy before Game 3, and he will be hoping to prove a point in that game by delivering a big performance that can help his team make a comeback into the series.

READ | Jamal Murray net worth: How much is the Denver Nuggets star worth?

NBA Playoffs 2021: When is Denver vs Phoenix Game 2