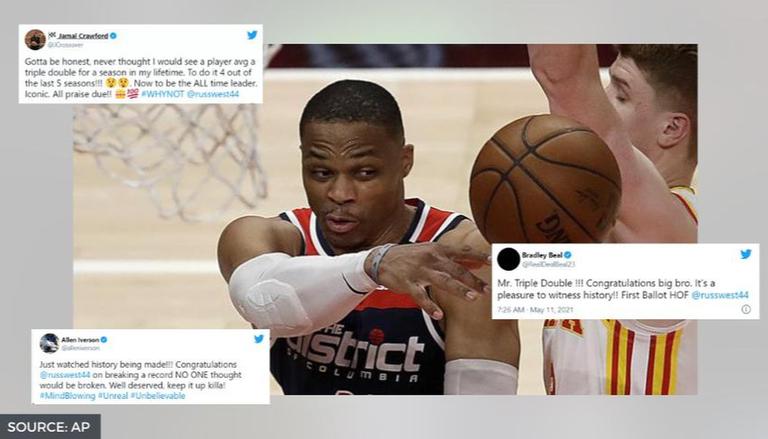 For 47 years, Oscar Robertson has carried the record for the most number of triple-doubles in the NBA. Russell Westbrook, however, has been close to the record for ages, finally surpassing it on Monday (Tuesday IST). As expected, fans and other NBA players turned to praise Westbrook's performance, where the 32-year-old guard can only continue to post more triple-doubles.

“I normally don’t like to pat myself on the back but tonight I will just because I’m so grateful for the ones before me and so blessed to the man above to allow me to go out and do it,” Westbrook said after the game. “I take this job very seriously and I’m super grateful for my teammates and coaches on my journey so far".

Oscar Robertson's record of 181 triple-double record was made in 1974, looking unbreachable to many. However, Westbrook has done so during his 13 seasons in the NBA. Robertson, a legend in the game, played 14 seasons while averaging 25.7 points per game in his career.

Westbrook scored his 182nd triple-double with 8:29 remaining on the clock, making his 10th rebound. He scored 28 points, 13 rebounds and 21 assists for the game, missing a possible game-winner down the stretch. Apart from Robertson, who is second on the list, the third place is occupied by Magic Johnson (138 triple-doubles). Jason Kidd had 107 in his career, and the LeBron James stands at 99. Several NBA players like Bradley Beal, Magic Johnson and Allen Iverson reacted to Westbrook's record on social media.

Gotta be honest, never thought I would see a player avg a triple double for a season in my lifetime. To do it 4 out of the last 5 seasons!!! 😲😲. Now to be the ALL time leader. Iconic. All praise due!! 👑💯 #WHYNOT @russwest44

Just watched history being made!!! Congratulations @russwest44 on breaking a record NO ONE thought would be broken. Well deserved, keep it up killa! #MindBlowing #Unreal #Unbelievable #VideoGameNumbers #MrTripleDouble pic.twitter.com/t4QBKOQeWN

Congrats to my brother @russwest44
Incredible player and person 🙏

At this moment, the Wizards are currently ranked 10th in the Eastern Conference with 32 wins and 37 losses. While the Wizards had made it to the ninth spot, the team's loss vs the Hawks has them back in the 10th spot. Though this does not guarantee a spot in the postseason, it will give the Wizards one chance to make it to the playoffs. As per the league's format for the play-in, the No. 10 seed will play the No. 9 seed. The winning team will have to play one more play-in game to secure their playoff position.

READ | "It's just a blessing" Russell Westbrook on setting NBA triple-double record
First Published: 11th May, 2021 14:24 IST
SUBSCRIBE TO US