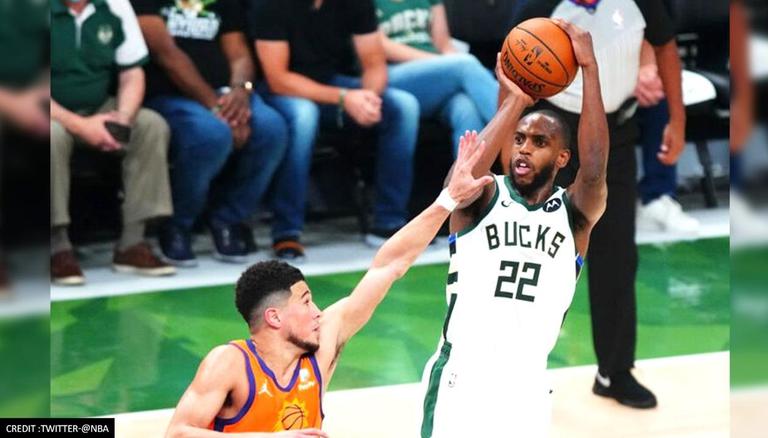 
Basketball lovers are all set to watch the Suns vs Bucks live as the Phoenix Suns and Milwaukee Bucks are tied 2-all in the series and play just a few blocks from the Chase Field. Recently, Middleton’s big shots — and throw in Giannis Antetokounmpo’s big-block — may have turned around the course of the NBA Finals. Middleton scored 40 points, including 10 straight for the Bucks down the stretch to send them past the Phoenix Suns, 109-103 on Wednesday night to tie the series 2-2.

Meanwhile, Milwaukee Bucks is hoping to have their first series lead after this NBA playoffs. The Pheonix Suns went into Milwaukee for Games 3 and 4 with a 2-0 series lead. However, the Suns are now back home for Game 5 with this series even at two games apiece. The Bucks, like their second-round series with the Nets, have found a way to fight back in this series.

Bucks vs Suns airs on ABC tipping off at 9:00 p.m. ET on Saturday, July 17th in the US. Apart from the tv, you can also enjoy this game on YouTube TV, Hulu with Live TV, Sling TV, and FuboTV.  Despite Sling doesn't have ABC, it does have ESPN's simulcast. ESPN and TNT are both included in the Sling Orange package, which costs $35. Sling will be a perfect place to watch all of the NBA playoffs, as Sling Orange gets you TNT, ESPN, ESPN3, and its Sports Extra pack gets you NBA TV. Every game will be available live via NBA TV, while the nationally broadcast game will also be available via ESPN digital platforms. NBA games will be broadcasted nationally across ESPN and TNT.

Middleton’s hot hand and a big block from Antetokounmpo gave the Bucks their second straight victory in the first close game of the series. Antetokounmpo had 26 points, 14 rebounds and eight assists. His streak of 40-point games ended at two but the only number that matters for the Bucks is on the series scoreboard.

Devin Booker scored 42 points for the Suns, but his foul trouble cost them a chance to build a big lead in the second half. Chris Paul struggled through a 5-for-13 night, finishing with 10 points and five turnovers.

Game 5 is Saturday night in Phoenix.

“This is a tough one but we’ve got to bounce back,” Paul said. “That’s why we fought all season to get home court.”

READ | NBA 2K22 speculations: Here are some rumors about the game's Cover Star and Launch Date

Phoenix led by two with 2 1/2 minutes left before Middleton made the next two baskets to give Milwaukee a 101-99 edge with 1:28 to play. It appeared the Suns would tie it with a lob pass to center Deandre Ayton but Antetokounmpo swooped in to block it, flexing his muscles to the crowd behind the basket as the Bucks broke the other way on the fast break.