According to recent reports, the Super Bowl streaker Yuri Andrade apparently missed out on the $374,000 he was supposed to earn over a bet. 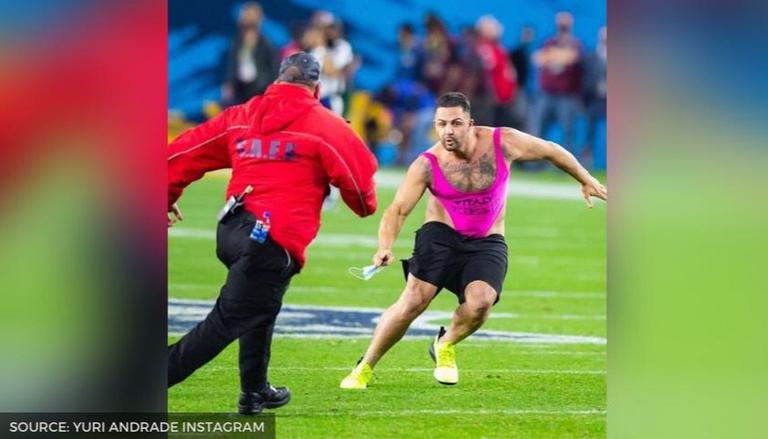 The Super Bowl 2021 concluded last weekend with the Tampa Bay Buccaneers dominating the Kansas City Chiefs 31-9 at the Raymond James Stadium in the final. The final quarter, however, had a streaker run across the field. While the videos went viral postgame, several recent reports state that the streaker – Yuri Andrade – would miss out on all bets he made.

Super Bowl streaker tampering caused him to miss $374,000 he was to earn?

The Super Bowl streaker Andrade turned out to be the unexpected highlight of the game. However, Andrade apparently had multiple bets in place before he ran across the field. As per TMZ, he was apparently going to win around $370,000 for pulling off the stunt. He apparently placed a $50,000 bet via Bovada, which offered plus-750 odds.

What was Super Bowl streaker bet?

Andrade apparently even got a friend involved, who created the diversion required for him to jump and run all the way to the end zone. While he was only charged for trespassing, the Florida-man might not be able to make the said quarter-million dollars. As per Bovada's spokesperson, they cannot let the bet go through because of Bovada.

“Our players have always trusted us to ensure the integrity of all props offered in our sportsbook,” a Bovada spokesperson said while talking to Front Office Sports. They added that they will continue to make sure that any kind of "publicity stunts or ill-intended behaviour cannot adversely affect the outcome of a player’s wager".

As the bet is called off, Andrade might not be making the money he thought of. Since the Super Bowl, Andrade also posted multiple posts on Instagram, mostly bragging and proud about his move. He even shared some news about the money he would make, while also sharing a video on James Corden and tight end Rob Gronkowski. The latter, who was on Corden's show, spoke about how Andrade added the entertainment they needed in an otherwise smooth-sailing game.

FAN ON THE FIELD!

"Jim, did you run down there?" pic.twitter.com/FzIfmbKL4x

As per Tampa TV station WFLA, Andrade currently resides in Boca Raton. According to various reports, Andrade was arrested and later charged with trespassing before a $500 bond was posted. As per WLFA records, he was released before 8:00 AM on Monday EST (9:30 PM IST).

USA Today also noted that Andrade described himself as 'self-employed'. When asked, he said he was in 'international business'. His name was also linked to Vitaly Zdorovetskiy. As per reports, Zdorovetskiy wanted to promote his adult website called 'Vitaly Uncensored'. Andrade — who wore a hot pink leotard —had the words Vitaly Uncensored written on the garment.