What Happened To Russell Westbrook? Why Did A Fan Throw Popcorn At Wizards Star? 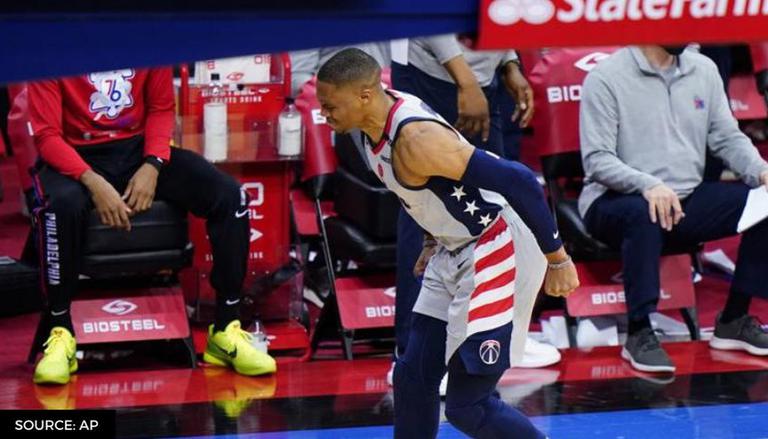 What happened to Russell Westbrook? Why did a fan throw popcorn at Westbrook?

Russell Westbrook appeared to have popcorn poured on his head by a fan on his way to the locker room with an apparent injury.

The fan was ejected from the game. pic.twitter.com/WgtvKMFYHH

After one person dunked popcorn on Westbrook as he left, other fans and players remained angered over the issue. Westbrook's reaction was immediate, as he had to be restrained by staff members around him. The fan was ejected later on.

"To be completely honest, this s*** is getting out of hand, especially for me. The amount of disrespect, the amount of fans just doing whatever the f*** they want to do - it's just out of pocket," Westbrook said. "There are certain things that cross the line. Any other setting ... a guy were to come up on the street and pour popcorn on my head, you know what happens".

Westbrook added that in arenas, they have to start protecting players. "We'll see what the NBA does". Bradley Beal as well agreed that the incident was completely disrespectful, and added that Philadelphia was better than that.

"This was classless, unacceptable behavior, and we're not going to tolerate it at Wells Fargo Center," said Valerie Camillo, the center's business operations president in a statement. "We're proud to have the most passionate fans in the country and the best home-court and home-ice advantage around, but this type of behavior has no place in our arena".

This fan should never be permitted in a #Sixers game ever again after throwing popcorn on Russell Westbrook while leaving court with injury. And they can track his ass down. No class! pic.twitter.com/ra029MaBDF

Westbrook, even before his injury, struggles a little on the court as he scored 10 points, 11 assists, and 6 rebounds while shooting 2-of-10 from the field. The 76ers are in the lead and might secure a 3-0 advantage with Westbrook injured and not at full health. Bradley Beal had 33 points for the team. However, the Russell Westbrook popcorn incident is expected to fire up the team. Here is more on the NBA playoffs 2021 bracket -