Following an outstanding display by the Indian contingent at CWG 2022, Chief of Army Staff Manoj Pande interacted with the Indian Army's medal winners. 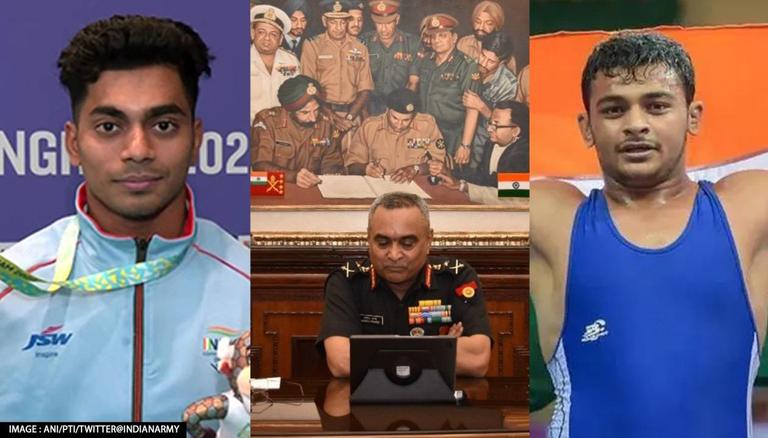 
Following an outstanding display by the Indian contingent at the Commonwealth Games 2022, the Chief of Army Staff Manoj Pande interacted with the Army personnel who brought home medals. A total of eight Indian athletes who won medals at CWG 2022 are from the Indian army.

Taking to Twitter, the Indian Army put up a post, stating that the Chief of Army Staff General Manoj Pande had a video interaction with the Indian Army medal winners. Pande congratulated them for their sterling performance and for making the nation and Indian army proud. The Chief of Army Staff concluded his remarks by wishing the stars the best for their future endeavours.

Gen Manoj Pande, #COAS had a video telephonic interaction with #IndianArmy Medal Winners in #CommonwealthGames2022. #COAS lauded them for their sterling performance & making the Nation & #IndianArmy proud. He wished them good luck for their future endeavours. #MissionOlympics pic.twitter.com/GIW3WJClX1

Debutant Achinta Sheuli won the gold medal in the Men’s 73kg weightlifting with a whopping lift of 313kg (143kg in snatch and 170kg in clean & jerk). It was India's third gold medal and tenth overall in weightlifting. While India was extremely dominant in weightlifting, the best contingent was yet to come in the form of wrestling.

A total of 12 wrestlers took part in CWG 2022 and all returned home with medals. When it came to wrestlers from the Indian Army, Deepak Punia was at the forefront. The 23-year-old from Haryana was utterly dominant in the Men’s 86kg freestyle wrestling category as he went on to win the gold medal by defeating Pakistan's Muhammad Inam in the final.

Considering that two of India's most successful disciplines (shooting and archery) are not a part of CWG 2022, the contingent has put up an extremely impressive performance. They finished in fourth place by winning a total of 61 medals (22 gold, 16 silver and 23 bronze).