CWG 2022: PM Narendra Modi was quick to congratulate the Indian wrestling continent for winning several medals at the Commonwealth Games 2022 on Friday. 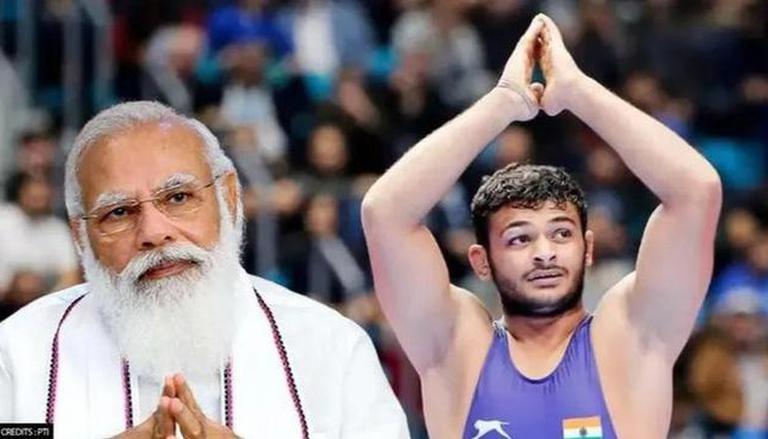 
Prime Minister Narendra Modi was quick to congratulate the Indian wrestling continent for winning several medals at the Commonwealth Games 2022 on Friday. It was raining medals for India as they won five medals in quick succession. The day began with Anshu Malik winning a silver before Bajrang Punia, Sakshi Malik and Deepak Punia won a gold medal each.

Taking to Twitter, PM Modi congratulated Anshu Malik for winning the silver medal on her birthday. He added that Anshu's passion for the sport is likely to motivate several youngsters in the country. While Anshu was utterly dominant until the final, she could not replicate a similar level of performance against Odunayo Folasade Adekuoroyeto of Nigeria in the gold medal match.

Congratulations to @OLyAnshu on winning the Silver medal in wrestling and that too on her birthday. My best wishes to her for a successful sporting journey ahead. Her passion towards sports motivates many upcoming athletes. pic.twitter.com/twXSzlrHxU

On the other hand, defending champion Bajrang Punia not only dominated all his bouts until the final, but he also overpowered his Canadian opponent in the men's 65kg gold medal match. The 28-year-old beat Lachlan McNeil 9-2. Following Bajrang's victory, PM Modi took to Twitter and lauded the veteran wrestler by stating that his name is 'synonymous with consistency and excellence.' He concluded his remarks by also giving him his best wishes.

The talented @BajrangPunia is synonymous with consistency and excellence. He wins a Gold at the Birmingham CWG. Congratulations to him for the remarkable feat, his 3rd consecutive CWG medal. His spirit and confidence is inspiring. My best wishes always. pic.twitter.com/hjBYjd1lCP

PM Modi was also quick to congratulate the other three wrestlers for winning medals for India in Birmingham.

Our athletes continue to make us proud at CWG Birmingham. Thrilled by the outstanding sporting performance of @SakshiMalik. I congratulate her for winning the prestigious Gold medal. She is a powerhouse of talent and is blessed with remarkable resilience. pic.twitter.com/svETMdfVBR

Feeling proud of the spectacular sporting performance by our very own Deepak Punia! He is India’s pride and has given India many laurels. Every Indian is elated by his winning the Gold medal. Best wishes to him for all upcoming endeavours. pic.twitter.com/tk9NuAIN1s

India’s wrestlers are outstanding and this is clearly reflecting in the CWG. Proud of @DivyaWrestler for winning a Bronze. This achievement will be cherished for generations to come. Best wishes for her future endeavours. pic.twitter.com/ougzjDmQF0

Anshu Malik's silver and Bajrang Punia's gold medal was only the start of success on the night, as soon after, Sakshi Malik and Deepak Punia also won a gold medal match each. Sakshi beat Canada's Ana Godinez in the women's freestyle 62kg event by fall to win her first ever gold medal at the Commonwealth Games. On the other hand, Deepak defeated defending champion Muhammad Inam of Pakistan by a scoreline of 3-0, much to the delight of fans back home.