President Murmu and the Indian Army took to social media to congratulate Jeremy Lalrinnunga, who won the gold in the 67kg weightlifting category at CWG 2022. 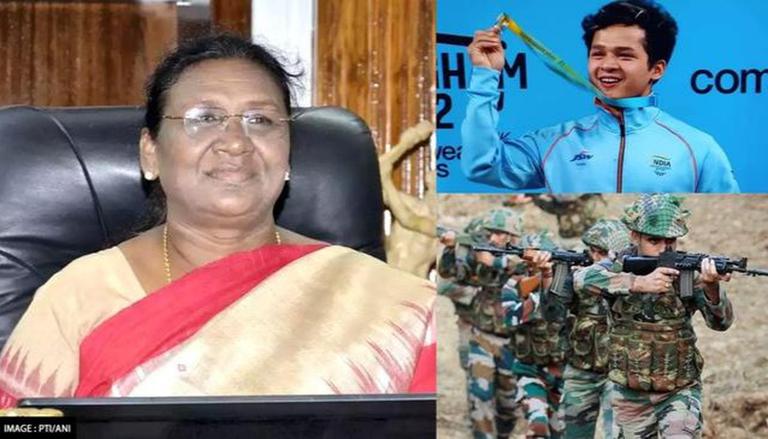 
Following Jeremy Lalrinnunga's jaw-dropping effort to win the gold medal at the Commonwealth Games 2022 on July 31, President Droupadi Murmu and the Indian Army took to social media to congratulate the 19-year-old. Lalrinnunga finished on the top step of the podium in the 67kg weightlifting category by registering a staggering lift of 300kg (140kg in snatch and 160k in clean & jerk).

After Jeremy Lalrinnunga scripted history by registering a new Commonwealth Games record to win gold in the 67kg weightlifting category, President Droupadi Murmu and the Indian Army took to Twitter to congratulate the 19-year-old from Mizoram.

President Murmu praised Lalrinnunga for not just winning a gold medal for India but for demonstrating immense self-belief despite suffering an injury. She believes that the 19-year-old would have inspired millions in the country by scripting history at the Commonwealth Games 2022.

READ | Who is Jeremy Lalrinnunga? India's 19-year-old weightlifter who won gold at CWG 2022

Congratulations, Jeremy Lalrinnunga for winning gold in Weightlifting at #CommonwealthGames. Your self-belief despite injury during the event enabled you to create history & inspire millions.Your podium finish has filled Indians with pride. Wishing you more such moments of glory.

Congratulations to the prodigious #JeremyLalrinnunga for winning gold at the CWG’22 with a stupendous performance. Your achievements at such a young age & your remarkable journey are truly inspirational and fills us all with immense pride and joy !#CWG2022 pic.twitter.com/56GjK4vWwx

Jeremy Lalrinnunga achieved a record-breaking 140kg lift in the snatch category and 160 kg in the Clean and Jerk category, which combined to give him a lift of 300kg, a record at the Commonwealth Games. He successfully lifted 136kg in his first Snatch attempt to move to the top of the leaderboard. Edidiong Joseph Umoafia was at second with 130kg and Samoa's Vaipava Ioane at third with 127kg at the time of his first attempt.

Lalrinnunga then lifted a staggering 140kg in his second Snatch attempt, a new Commonwealth Games record. He tried to better this record by going for 143 kg in his final attempt but failed to do so. He finished the Snatch category with 140kg, at the top of the table. Edidiong Joseph Umoafia was at second with 130kg and Samoa's Vaipava Loane at third with 127kg at the end of the Snatch event.

Lalrinnunga now had to lift 154kg in his first attempt to match the Nigerian, which he did successfully. With this, he set a new CWG record and brought himself to the lead in the overall competition with a combined lift of 294kg. In his second C&J attempt, Jeremy lifted 160kg to take the lead with a combined lift of 300kg. By lifting 300kg combined, he had set another new CWG record. In his final C&J attempt, Jeremy decided to lift 165kg but he failed.

Since no other competitor managed to match Lalrinnunga's 300kg lift, he went on to win the gold. It was India's second at CWG 2022 after Mirabai Chanu won the gold in weightlifting women's 49kg category on Saturday. Vaipava Loane of Samoa won the silver medal with a combined lift of 293kg, consisting of 127kg in Snatch and 166kg in C&J. The Bronze medal went to Nigeria's Edidiong Joseph Umoafia, who had a combined lift of 290kg.