Pakistan are unlikely to boycott the World Cup in India next year because if they do so, they will risk losing their share of revenue. 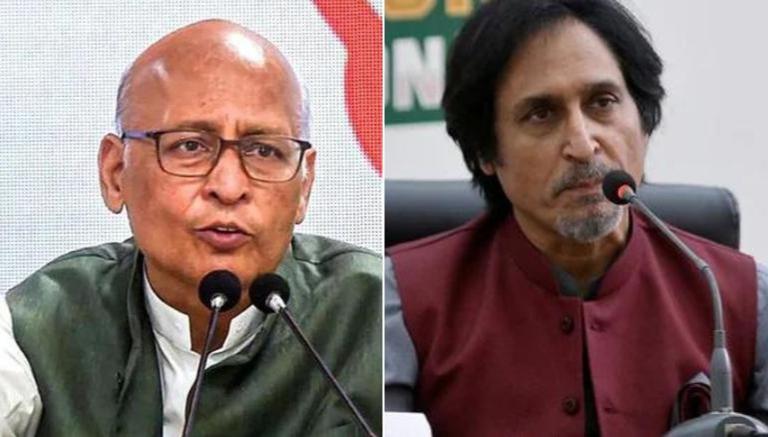 
Rajya Sabha MP Abhishek Manu Singhvi recently took a jibe at Pakistan Cricket Board (PCB) chairman Ramiz Raja, who has threatened to boycott the upcoming ODI World Cup, which is scheduled to be held in India next year. Ramiz on Friday told the press that Pakistan would not travel to India for the 50-over World Cup next year if the Men in Blue don't come to his country for the Asia Cup 2023. Singhvi has now responded to Ramiz's remark by sharing a hilarious meme on his official Twitter handle.

Singhvi shared a dialogue from the 2012 movie Gangs of Wasseypur, where one of the major characters Ramadhir Singh tells his son, "Chhota aadmi gundai karna chahta hai to karne do (If a small man wants to act like a goon, then let him do it)."

Pakistan are unlikely to boycott the World Cup in India next year because if they do so, they will risk losing their share of revenue that is generated through the marquee event and distributed among the participating nations. Pakistan are scheduled to host the 50-over Asia Cup next year. The Asian Cricket Council (ACC) chairman Jay Shah, who is also the secretary of the BCCI, had said last month that the Asia Cup may be shifted to some neutral venue because India won't travel to Pakistan.

This triggered the Pakistan Cricket Board and Ramiz Raja, who has now said that they will boycott the next year's World Cup if India doesn't travel to Pakistan for the Asia Cup. The PCB was awarded the hosting rights for the Asia Cup 2023 at an ACC meeting, where representatives of all member nations were present. The meeting was headed by Jay Shah.

Earlier, former Pakistan cricketer Danish Kaneria had slammed Raja over his boycott threat to India, saying that the PCB 'doesn't have the guts' to boycott an ICC event. Kaneria further said that India will not mind even if Pakistan pulls out of the World Cup because the country already has a huge cricket market. Kaneria stated that boycotting the World Cup will only affect Pakistan and its cricket.