Sachin Tendulkar congratulated Ajaz Patel for his performance & said achieving such a feat at his 'home away for home' was truly special. 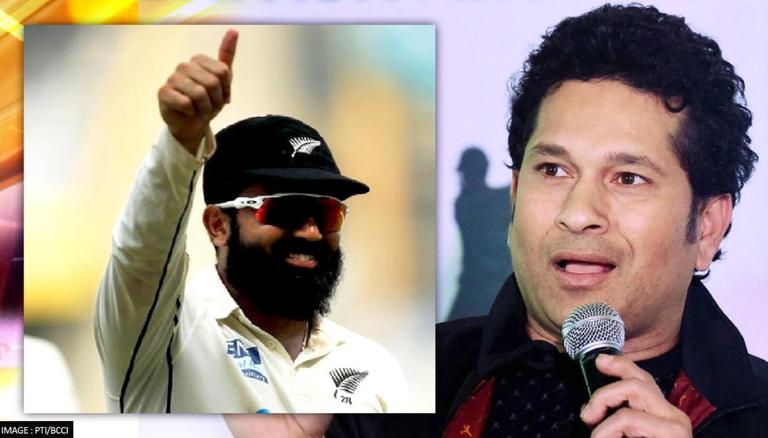 
New Zealand's left-arm spinner Ajaz Patel entered the history books on Saturday after he bagged 10 wickets in one inning, thereby becoming only the third-ever player in cricket history to do so. Prior to Ajaz, England's Jim Laker and India's Anil Kumble were the players to achieve the remarkable milestone. The Mumbai-born player's stellar performance met with a huge standing ovation from the Wankhede crowd including Ravichandran Ashwin as he walked back to the pavilion after concluding the innings. Cricketing legend Sachin Tendulkar congratulated the Kiwi spinner for his stunning performance and said that achieving such a feat at his 'home away for home' was truly special.

Congratulations #AjazPatel on picking 1️⃣0️⃣ wickets in an innings in Test cricket.

Achieving this rare feat at home away from home is truly special.#INDvNZ pic.twitter.com/lpVzzHWPOP

"Congratulations Ajaz Patel on picking wickets in an innings in Test cricket. Achieving this rare feat at home away from home is truly special," Tweeted Tendulkar.

India started day two of the second Test between India and New Zealand with Wriddhiman Saha and Mayank Agarwal batting, soon though Ajaz Patel carried on where he has left on day one by taking wicket after wicket. At the end of the first innings, India finished with 325 runs after Axar Patel's half-century and Mayank's stellar 150 run stand. Ajaz Patel finished the innings with the figures of 10 wickets in 47.5 overs, conceding 119 runs at an economy of 2.49.

When New Zealand came out to bat, they had expected to put up a fight but Mohammed Siraj demolished the openers within the first four overs and then Ross Taylor in the sixth to put New Zealand at 17 for three in 5.1 overs. After that, the Indian spin attack came into action and they did not hesitate for a second as Ravichandran Ashwin took four wickets and Axar Patel took two to end New Zealand's first innings at just 62 runs.

READ | IND vs NZ: Ajaz Patel reacts to historic 10-wicket haul; 'To be born here, then come back'

India had the option to ask for a follow on but they chose against it and decided to bat their second innings. They had to shuffle things a little as instead of Shubman Gill, who picked up an injury, opening with Mayank Agarwal they sent Cheteshwar Pujara and two have done exceeding well as they had taken India to 69 for no loss at the end of day two. Mayank finished the day with 38 runs off 75 balls and Pujara with 29 runs off 51 balls.