It was confirmed by the Indian Premier League on Tuesday, that two new teams from two Indian cities would be announced ahead of the 2022 IPL season. 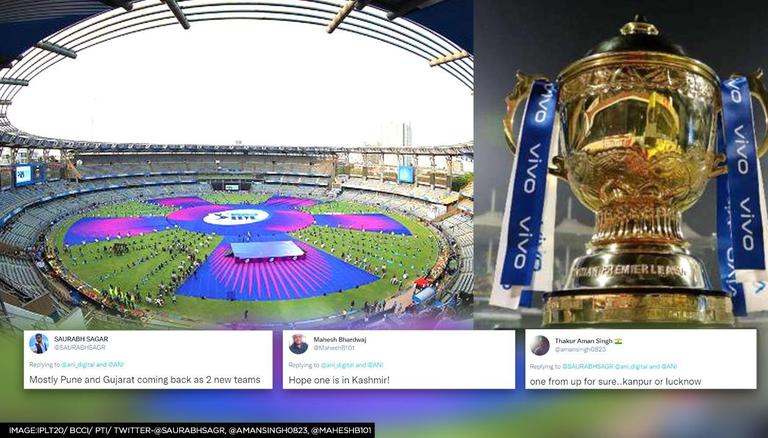 
The BCCI announced on Tuesday, that the Indian Premier League Media Rights for the cycle 2023-2027 will be released after the announcement of two new teams in IPL on October 25, 2021. Following the announcement by BCCI, cricket fans in India were quick to speculate, which of the two Indian cities would have their teams, as IPL is all set to become a ten-team tournament. Currently, in the 2021 IPL season, eight teams are locking horns with each other for the IPL title, as the tournament approaches its closure on October 15.

Cricket fans speculate which two cities will get IPL franchise

Cricket fans on Twitter speculated the new teams to be hailing from cities like Ahmedabad, Lucknow, Indore, and Pune among the many others. A user claimed that one of the new teams will surely be Ahmedabad, as the World’s biggest stadium, Narendra Modi Stadium, also known as Motera Stadium is situated in the city. The user added that BCCI would earn a great deal of money with the tickets sold in the stadium, as the stadium can host up to 1,32,000 spectators at once.

One team is sure that is Ahmedabad.
There are mainly two reasons for this.
1) Current BCCI secretary is from Ahmedabad.
2) World's biggest ground is in Ahmedabad. So good Amount of money will be earned. And of course Pride of Ahmedabad and 🇮🇳#Ahmedabad #IPL https://t.co/kgb4utcQya

Another user pitched in favour of Pune for having a new IPL team, as the city has a great pull from cricket fans. However, citing Pune joining and quitting the tournament twice, the user added that Indore or Lucknow can be next in line as it would be loved by the fans in Central India. Another user said that Bharat Ratna Shri Atal Bihari Vajpayee Ekana Cricket Stadium in Lucknow has an upper hand in terms of audience capacity.

Ahmedabad surely! NM Stadium will be used.
Lucknow, Indore are good but will not get a great pull like Pune. But Pune has already come & gone twice. I think it would be Indore or Lucknow only. Central India would love it.
However 10 Team IPL will be long & boring 👎 https://t.co/dYNGKnFdhg

One is Ahmedabad for sure. The largest Cricket stadium should have a base IPL team of its own.
The other one might be between Indore & Lucknow. Guess, capacity wise Lucknow has some edge over Indore.

Meanwhile, a user predicted that IPL will eventually have 16 teams competing in the future as it is just about the time and bidding process. The user mentioned Ahmedabad, Lucknow, Indore, Guwahati, and Ranchi among the other 16 teams. At the same time, few of the users called for the inclusion of Jammu and Kashmir as an IPL team.

Eventually we will have 16 team IPL, it's just about time & bidding preferences. So, don't fight.

These are my picks in order.#IPL2021 #IPL #IndianPremierLeague

Hope one is in Kashmir!

J&k and assam Or northeast

As per ANI, the BCCI also announced on September 21 that the board has decided to extend the date of purchasing the Invitation to Tender (ITT) to own and operate one of the two new IPL teams, till October 10. Prior to this announcement, the last date to purchase the ITT for the right to own and operate the team was October 5. The ITT would be available for interested buyers on receipt of payment of INR 10,00,000 plus GST. In the official press release, BCCI added that the payment would be a non-refundable Tender fee and the interested parties may email at ittiipl2021@bcci.tv to receive further details about the ITT purchase.

WE RECOMMEND
IPL 2021 MI vs PBKS live streaming: How to watch IPL 2021 in India, UK, US and Canada?
IPL 2021 Points table after RCB vs DC: Check updated Orange Cap and Purple cap holders
Two new IPL teams to be announced on October 25 after India vs Pakistan T20 WC clash
IPL 2021 KKR vs DC Live Streaming: How to watch IPL 2021 LIVE in India, UK and US?
IPL 2021: Ravi Bishnoi's 'magical' delivery cleans up Suryakumar Yadav for a golden duck
Listen to the latest songs, only on JioSaavn.com